We'll Always Have Entebbe.....A Couple Reviews By An Old Friend! 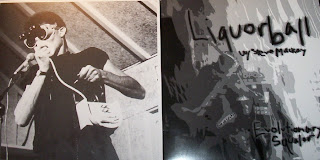 Due to some matters of national importance (more or less), I's been called away to help keep our necks red, the majority white & beer blue. So's I have left this blog in the capable hands of my good friend & comrade, Olatunbosun Olabode. We's go way back, as I'm sure he'll prattle on about somewhere's in his meanderin.He's a mite on the jovial side too, but hell, what kinda sonofabitch would I be if I wrangled in a fella for laughin?, A no good one, that's what! Anyway, see you's on the flip & don't forget; Freut euch des Lebens!
Your Editor,
Roland Woodbe

Haha, a big HELLO all the readers of Roland Woodbe blog. Maybe you know, but Roland Woodbe is GREAT facilitator for contemporary sounds of music. For him to ask me to fill those shoes, I could not say no, but also cannot hope to walk many miles in them either. I will tread slowly & for this, I hope you can understand.
I 1st meet Mr. Woodbe many yrs ago in Kampala, Uganda, where we were both working (or in Woodbe's case, spying, haha!) in the court of His Excellency, Idi Amin Dada. I was an attaché to the Minister of Health, one Henry Kyemba. Mr. Woodbe befriended me (his grasp on the Nubian dialect is outstanding) & we shared many wonderful occasions back then. His Excellency at the time was far removed from the monster he would soon become. We used to love it when, in the wee hrs of morning, just before the break of dawn, Amin would rest his Johnny Walker & begin his series of hilarious impersonations. If I would close my eyes when he would do Ed Sullivan, I would feel like I was transported to CBS Studio 50, in New York City. Really, so perfect! And when he would play his little accordion & sing 'Wasted Day & Wasted Nights' in a Donald Duck accent, I could not see a dry eye in the palace. A very funny man. But his penchant for close talking (as well as mumbling & spittle) was the undoing. Yes, Amin was a close talker & his breath was abominable. Mr. Woodbe began to spread the rumor it was so because of cannibalism. It seemed funny at the time, but no one was laughing when heads began to roll. Perhaps it was so, I cannot substantiate the atrocities of a despot. I will go on record & say this-it would not have killed him to floss. But for a dear friend who advised His Excellency on doing so, he was not so fortunate. Amin explained the execution thusly " when you have no longer a head, flossing is the least of your worries". Roland Woodbe & I began our escape from Uganda immediately.
I am now employed as a taxi driver. By chance I was at Philadelphia Airport a few months ago when who should sit in my cab but this old friend! We were very much surprised to be in each other's company again, please believe this. He told me of the Siltbreeze label & this Siltblog & when I arrived him at the requested destination, he asked me to hold on & returned to my taxi w/a parcel of cd's & records for my ownership. Of course, I have become a fan of Siltbreeze, so many wonderful treasures from this imprint that have shaken my ears. If I were asked for favorite, I could only reply "THEM ALL", hahahaha!
But my friend Roland Woodbe said he might be compelled to call upon my services one day. I said of course & it was with this understanding I am now writing to you, his readers. I hope you will appreciate my contribution.


I cannot say I have had the good fortune to come across the work of Mr. Leo Coomans in the past. He would seem to be a particle, almost a footnote to the Free Improvisation scene of the Low Countries by way of a discography (prior to this,participation on 1 lp + a 7"). So it has been with much enthusiasm that I have embraced his remarkable solo lp out now on the Ultra Eczema label, entitled 'Basement Recordings 1978-1982'. For many of the 80's I lived in Bay Area of Northern California & made the acquaintance of an astute record seller by the name of Rick Ballard. He would order me many different records of Improvisation & Jazz. I would say some of my favorites were from a label called Instant Composers Pool, which was based out of The Netherlands. One of the main participants, Han Bennink, seemed equal parts intensity & playfulness. His music incorporated not only the new jazzing stylings that were free, but also the minimalist experimentations of John Cage as well as the anti-art, Dadaist sentiments of the Fluxus movement. So a real everything-and-the-kitchen-sink cacaphony might ensue on his recordings. Or perhaps he & fellow collaborators would walk, talk, whistle, make sounds of wind whipping in motion,imbibe, play ping pong, or simply fall silent. It was all fair game & astonishingly great. And that holds true on this Leo Coomans record. As stated, these are private recordings from the artist dated 78-82 & his aural canvas is alive with great splotches of aerosol & voice, saxophones (tubed, soprano & baritone), saxphone mouthpieces, bath tub's, vacuum cleaners, it's accessories, harmonica,tape recorder, piano & more voice. Interestlingly, the 1st track, "Aerosol' sounds like mutant Stockhausen while the final cut, a ludicrous deconstruction of that tired standby, 'Louie, Louie', that makes the Half Japanese version (as smidgen as it is, hahahaha!) sound like John Philip Sousa in comparison. So you see, it begins in an inner space only to end in one that is outer.Or should I say, outre? HAHAHAHAHA, I don't care! This is a truly wonderful record, the work of a gifted, unbridled musician whose wit (& talent) runs the gamut of rapier to the absurd. Please contact the following mailorders for possibility of purchase, only 300 available worldwide;
www.mimaroglumusicsales.com or www.forcedexposure.com & direct to; www.ultraeczema.com

And while my brain is full & conjuring up sounds within a jazz milieu I would like to say a few things on behalf of a greatly overlooked lp by Liquorball w/Steve Mackay entitled 'Evolutionary Squalor', self released by Grady Runyan on Rocketship Records. Hahahahahaha, no one can peg Liquorball as sounding like any one particular band. In the 90's they were able to dexterously walk over the coals of thud rock ('Fucks The Sky'), exude billowing plumes of carburetor ingested dronabinol ('Hauls Ass') or raise greasy, psychedelic hackles that resembled down syndrome Fushitsusha ('Live In Hitlers Bunker') to a small but dedicated following. The more things change, the more they stay the same as it would appear Liquorball is playing to their tried & true but I would like to say some words & maybe it might open certain ears & wallets. After all, membership has it's privileges, hahahahahaha!
Of course the main frame of reference on 'Evolutionary Squalor' is the participation of Steve Mackay. I'm sure Mr. Mackay is known to the readers here, so no need to state the obvious. What is interesting on this lp is how Mackay & Liquorball-with the help of Jason Biggs, Gordon Roberts & Conchobhar-corral a sound that insinuates (at once) Last Exit, (the French) Red Noise & Ray Russell. It is fusion, improvisation & progression all bearing down, all honking, quivering, shimmering & reverberating. As with the Leo Coomans lp, these are musicians who do not follow trends, but march & compose to the beat of their own ears & brains. It is quite mesmerizing, this 'Evolutionary Squalor'. And the name Liquorball…..hahahahahaha, I can think of some appropriate concoctions to go along with these aggressive lords of skronk. In fact, I have many times already brusied my hollow leg and lost my thinking cap while drinking generously from my stash of imported Wagari while spinning this. They say rum's don't kill people, banana's do. In the case of Wagari, it is both! AHAHAHAHAHAHAHAHAHAHA!!!!
Please feel welcome to buy this lp direct from www.myspace.com/gradysrecordrefuge or email grefuge@sbcglobal.net to check availability.

Goodness, will you look at the time? I have a taxi to drive, so I must be on my way. Thanks to Mr. Roland Woodbe for letting me sit in, I hope you have enjoyed my two cents. See you in the rain, hahahahahahaha!
Posted by Siltblog at 1:30 PM

Thanks for writing about us, always love to play with these guys!

My name is Donna and I've been following Siltblog for a little while now. Blogs like yours is what keeps me satisfied in the hunger to discovering new and rediscovering music. I especially love your post on being hired as a taxi driver. Drive safely!

Apart from flattering your awesome post--keep up the great job--I noticed that you guys feature some other great artists. Perhaps you'd be interested in checking out an artist I am currently working with. His name is Tristan Clopet, and is a totally talented singer-songwriter from Miami. I don't really know how to describe his sound, but some individuals say he channels Jeff Buckley with a dash of Red Hot Chili Peppers.

If you'd be inclined I'd be happy to send over a Tristan Clopet t-shirt. If you do check out Tristan's new EP, "Purple" and decide you like what you're listening to, I can also send some more swag your way (of course it would be nice to get a review on Siltblog)! :)

Here are some links that you may find important or not:

Everywhere I go, I’m second to arrive. My reputation precedes me, and sometimes it skips out on the bill. Cheap Flights to Entebbe