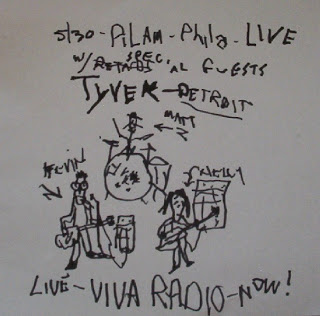 Viva Radio's Ted Shumaker has graciously sent over an interview he did recently w/Tyvek's Kevin Boyer & Matt Z. Running just baout 12 minutes, Ted get's the fella's to open up about what makes the band tick, the idea behind the cover art &...........listen for yourself;

The band is scheduled to play Phila next Saturday, May 30th, but I keep getting info on conflicting venue's. Originally booked at some place called PIFA (whatever the fuck that is), reliable sources now claim it's been moved to PiLam (3914 Spruce St.), though their Myspace makes no mention; www.myspace.com/thepilam
So who knows? Once it's sorted out, I'll post again. In the meantime, enjoy the VIVA interview.
Posted by Siltblog at 12:07 PM 5 comments:

After much delay, the lp's for Tyvek & Eat Skull's 'Wild & Inside' are now available, priced as follows;

Next up; Blues Control-'Local Flavor' lp/cd, ready sometime early summer.
Posted by Siltblog at 9:34 AM 2 comments: