A Defining Moment In Definitive.....MIKE REP & THE QUOTAS-Stupor Hiatus DBL LP OUT NOW! 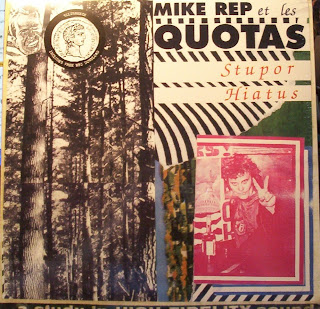 Some of you may recall the 1st Mike Rep & The Quotas retro lp that saw the light of day in mid 1992 (entitled Stupor Hiatus Vol. II). Culled from tracks spanning 1975 to roughly 1989, that release snakebit more than a few forward thinking pinetops w/it's baffling French themed jacket art (swiped from an extant Franco dollar bin staple) + the post Third Republic lyric translations. C'est quoi ce merdier ? And how many of you knew WHAT the 1st Stupor Hiatus was anyway (answer; an early 80's 1 issue fanzine published by Mike Rep, Jim Shepard & assorted friends. Your welcome)? But as we're fond of saying around these parts "It's Mike Rep....you want logic, beam down Mr. Spock".
Anyway, cut to 18 yrs later & finally a return to form; all the tracks previously available on the aforementioned lp + FIVE other obscure (& some previously unreleased) gems now in glorious Rep-Fi & a sweet gatefold jacket to boot. It is as it should have been all along. Also includes a free download card as well. Limited edition of 1000, prices are as follows;