Not Exactly A Singles Club, Then Again.....Beyond The Implode's 'This Atmosphere' 7" ep GONE 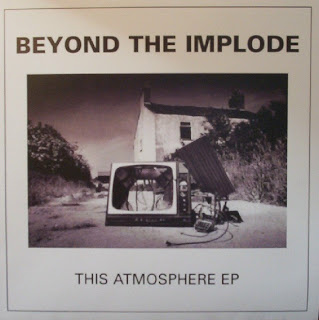 OUT OF PRINT
Incredulous as it may seem, Siltbreeze is proud to announce the release of a super limited 7" ep from the legendary Beyond The Implode; 4 tracks recorded (at home) by the band in 1979. Tracks 1 & 3 ('This Atmosphere' & 'Steel Car') were originally issued on the band's 1979 debut ep 'Last Thoughts' while tracks 2 & 4 ('Disperse The Clouds' + 'Mid Ad Version') have remained unheard & unreleased lo these many years. Astute fans will no doubt hear 'Mid Ad Version' & perhaps "see" it as an alternate take on 'Midnight Adventures' (found on Last Thoughts) & if so, count yourselves among the lucky ones. This project was sanctioned by BTI head honcho Eddie Smith who also provided the master tape & as such making this 100% legit, i.e., NOT A BOOTLEG. Released in a one time edition of 300 copies, this ep is solely available from this site; no distro's, mail-order or blackmail. Not yet anyway. Once it's gone, it's gone.
Posted by Siltblog at 11:48 AM 8 comments: