What Becomes A Footnote Least? The Legacy of Nelson Slater 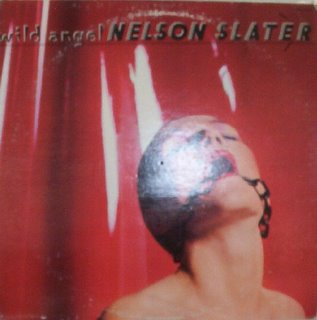 You can be forgiven if you have no idea who I'm talkin about. Hey, I wish I didn't. Slater was the discovery/protege of one Lou Reed who also coerced & produced Slater's one lp to date, 'Wild Angel' for RCA in 1976 (also Reed's label at the time). "I first knew Lou when we played together in a band at school in upstate New York. We kept in touch, & the last time he was in San Francisco he decided it was time to unleash me on the world". (Slater's notes on the back of the WA lp). I dunno about you, but to me 'unleash' is a verb that insinuates that something wild is gonna happen. This album is about as crazy as letting grandma out in the driveway at dusk. Okay, so she's had a couple of snifters of sherry but still, it's her driveway & besides, the porchlight is on. And dig the crazy Mick Rock cover. What's goin on fellas?
Soundwise this is 98% better than 'Rock & Roll Heart' (what isn't?) & 30% worse than 'Coney Island Baby', Reed's 2 lp's that fall-roughly-into the same time frame. If your a Lou Reed fan & don't know it, it's worth the 4$ you might have to spend to get it 2nd hand. That's if your sure you can get 2 of'em back when you resell it an hour later. Or if your really into sub marginal records of the 70's this one fits that criteria like a pie to the face. There's really nothing redeemable about the record & I'd have forgotten all about except.....

That's right, Nelson Slater is on a 21st century comeback run. Now based out've Cincinnati, Oh, he has seemingly beguiled a number of Columbus music denizens-notably a guy by the name of Tom Derwent-to enlist his legend & talent into their pool. The results are underwhelming. Two of the cdr's I've heard, going under the moniker 'Bored Teen War Team' are pretty sub par exercises in the old, can't-really-play, improv racket. The other one, a duo of Slater & Derwent on vocals & un/detuned guitars sounds like a shitty bootleg tape of a last gasp performance from an exit version lineup of the Velvet Underground. Without a drummer. And then there's the double cd of stuff that I couldn't take beyond the 1st song. Entitled 'The Sound Commander From Venus', it is a complete & utter wholesale swipe of Magazine's 'Song From Under The Floorboard'. I mean, it's laughable!
So if the guy's so bad, why mention him at all you ask? Because I am trying to warn you dear reader! It's only a matter of time before this shit slips into the bloodstream of Fusetron or some other distributor of New Weird America cdr's. And from then, how long until some label like Eclipse or Load take the bait & make it "legit"? At any rate, remember you heard about it here _____.
It's been 30 yrs since Slater's debut. How long can a guy riff on the 'personal friend of Lou's' line? Well, I guess 30 yrs! Or maybe there's some Velvet Underground thing goin on, like he's wowed all these kids w/tales of personal experiences w/VU. If that's all it take's, I'd rather listen to anything w/Don Howland on it than Nelson Slater. Don's dad saw the Velvet Underground once. And he never talks about it. Which is fine by me.
Posted by Siltblog at 9:37 AM 12 comments:

Okay I know what your thinkin. Bet you thought you'd never hear from me again. Truth be told, this is about the last fuckin place I would've figured I'd end up too. One week I'm hikin around Paducah & McCracken County gatherin info for my own zine, 'Footmobile (Musings For The Dedicated Walker)', breakin in some new shoes (I'm a Rockport man!) & then a week later, I'm in Philadelphia & it's rainin. What, you might ask, were the circumstances that uprooted a man from his jittery confines in the mutant, Ozark swampland of Western Kentucky & transported him to the jaded, slackjawed urban blight of the Northeast corridor? No, it wasn't blackmail or death threats but close. It was a woman. My girl (let's call her MG) was complainin about how she was tired of livin at home & the severe restrictions that came with it. She confessed that her Pa had been layin the wood to her ever since she & I had been seein each other. Naturally I was shocked to hear this. With my mind a'racin, I asked if he'd used protection & had anyone alerted the proper authorities. I also said-& I thought this was a nice touch-that if she was pregnant on account of it & decided she wanted the kid, I'd pretend to be the daddy, whether it come out retarded or not. Next thing I knew I caught a backhand across the side of my head that pretty near knocked me across the trailer. My ears crackled & through the din of static I could hear MG sayin to get my mind outta the gutter & that her old man had takin to "just" smackin her w/a yardstick for breakin curfew. The tinny sound reminded me of one of those shitty Whitehouse records but that's a story for another day. Anyhow, she said she'd had enough & was hightailin it to Philadelphia to live with her sister in some place called the Fishtown. She said if I was comin I'd better get to packin. My mind stuttered for a second. I thought about the magazine & my new shoes. But I figured, what the hell? You got yourself a pair of Rockports, you got shoes that'll walk ya anywhere! I was movin to a Fishtown.
Long story short; we've been here goin on 2 months. I don't know why they call it Fishtown but that Eraserhead movie sure make's a helluva lot more sense to me now. I got to attendin this monkey rodeo where I met Mr. Siltbreeze who claimed to be a fan of my work in Bananafish. Something about my "seething subjectivity" he said he found refreshing & would I want to be the editor of a blog he was starting in conjunction w/a Siltbreeze website? His alliteration sounded kinda queer & gave me the creeps for a second but I recovered & said that was pretty big talk & all, but what did it pay? He gave me one of those east coast looks where they close their eyes & smile when they talk. "I was thinking nothing to start, but I'll be happy to provide you with material to write about" he cooed. Well, he just about cut me off at the knees. The man is a shark! No wonder he's done all them records. I said, hell you got a deal & now it's off to the races. By the way, if anyone out there's got something you want to send me, I can be reached c/o Siltbreeze, 727 South 7th St., Phila, Pa 19147. But enough bullshit. I ain't not gettin paid to do nothin. Let's get busy.

EDITOR
Posted by Siltblog at 1:18 PM No comments: