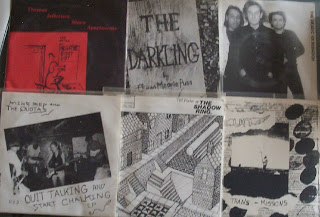 While I was digging around in the basement this weekend I came across a box containing some long out of print 7" titles. That got me curious so I trawled around some more, looking to see if there was anything else I'd put in storage & had forgotten about. The answer; not really. But I did find these & they are the LAST copies I have of each respective title. Availability is limited, so if your interested, please email me 1st to see if what your after is still around. Sorry if the prices seem high, maybe you can find them cheaper on Ebay. Or maybe not.

QMP were a female quartet hailing out of Auckland, NZ. Formerly known as Angelhead (then based in Dunedin) they released a cassette on Bruce Russell's legendary Xpressway label around 1991 or so. A move north & a name change, they released their debut 7" on Flying Nun sometime in early '92. Then it was on to Siltbreeze for the follow-up (early '93). 'The Darkling' is 5 tracks of dark, tempered, post-post punk. I guess you could say there's a Raincoats vibe going on here, but they had to go through (pre Daydream Nation) Sonic Youth to get it. Originally pressed in an edition of 800, I have 7 copies still available.

Released sometime mid 1993, this was a revamped Quotas Rep put together, they lasted a year or so & I believe this was the only thing they ever put out. Guitarist Gilmore Tamney would later go on to form The Yips, the other two.....? 3 tracks, loud, Rep-ified crud production, mostly unavailable elsewhere ('Village Idiot' can be found on the 'Tard & Furthr'd' cd comp) & are NOT slated for the Mike Rep & The Quotas dbl lp retrospective coming out next yr. This is it. These copies are from the 1st pressing of 500, all numbered, I have 0 copies left. SOLD OUT.

Regardless of the title, Sebadoh is nowhere to be found of this record. Just the Dead C lads having a laugh, such jolly jokers. This is the band's Hardcore release, 8 tracks of blazing, unbridled fury by (perhaps) the last band you'd expect to belly up to the H/C bar. None of the tracks on here are available elsewhere, though there is a snippet of 'Air' which would later be fully realized on the 'Operation Of The Sonne' lp. This came out originally in 1993, edition of 1000 copies. I have 0 available. SOLD OUT.

From 1994, after much cajoling, Ron House finally relented & let us put out a TJSA record. This was the bands 4th release following a split 7", a 7" & 12" for Datapanik.
'Baboon's Liver' is arguably one of the best songs ever recorded (& can be found on the Tard & Furthr'd cd compilation, http://www.siltbreeze.com/) but the other 3 songs on here rock pretty mightily as well. Originally in an edition of 1000, I have 0 available. SOLD OUT.

This 7" came out in early 1995 & was the band's 3rd release though their 1st for Siltbreeze. An excellent effort from the most unique band I ever worked with. Originally released in an edition of 800, I have 0 available. SOLD OUT.

This was Un's 2nd & final release. Ostensibly offered as a tour only 7", this was 1st made available by the band on their west coast jaunt w/Harry Pussy the summer of 1996. Stylistically the band seemed to orbit around planet Royal Trux & both the tracks sound like they could maybe be outtakes from 'Twin Infinitives'. It's also interesting listening to 'Hangin Judge' again after all these yrs & hearing the seeds of the New Weird America free-wha? orchard being sown therein. I loved these guys but never was a band more aptly named. Would you be surprised to know that member Marcia Bassett would later go on to record w/Double Leopards, Hototogisu, Zaimph & countess other agitators of musical form & function? Yep, she's famous! Originally released in an edition of 1000, I have 5 copies still available.

New 7" on Siltbreeze.....Little Claw Pony Up 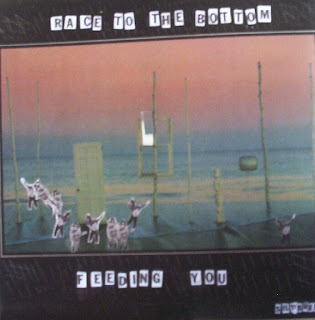 Hey, whaddya know, another 7"! We're knockin these things out like Kosher corn dogs at the state fair. And we ain't got a singles club or nothin! This time it's Little Claw that's delivering the goods, two new tracks ( 'Race To The Bottom'/'Feed You') that careen off the walls of your skull like drunken Valkyries lashing through the halls of Valhalla. What would Odin think? Who cares! Our own Roland S. Woode sez;

"The evolution of Little Claw has been wondrous to behold & now their beguiling cluck has found it's way into the Siltbreeze ranks. On what is their 5th vinyl outing, the band has laid down 2 distinct tracks & they are mightly gallops of ambidextrous charge. 'Race To The Bottom' rakes across the nodules of your brain w/serrated glee while 'Feeding You' could be a cosmic transmission from futuristic denizens who have carved Terrence Mckenna' pancreas into psychedelic sweetbreads & gobbled them for lysergic sustenance. The sound is, as one of the main pie tasters from Bull Tongue recently opined, "Fucking Awesome"! Edition of 400 copies".

Look for Little Claw on tour w/Eat Skull & (on selected dates) Psychedelic Horseshit all through Sept. 08.