Last Two Releases For 2008 Are Here! Get'em While They's Hot!

Here we are with the last 2 releases for 2008, a self titled one from The Love Is So Fast & 'Games For Slaves', the 2nd lp by Der Teenage Panzerkorps. TLISF is comprised of members of Los Llamarada, notably Danyhell & Estrella while also being produced by Sagan Youth. Silly me, I had always assumed these tracks were pre Los Llamarada but in fact TLISF was actually a band that existed for a short period when LL broke up (pre Exploding Now). That said, it still sounds like surreal, prehensile psychedelia, the palate filled w/flourishes of nascent staccato & outer space VU fumble. Edition of 500.
Der TPK had promised/theatened their followup effort would be more in the post-punk vein & they weren't kidding. 'Games For Slaves' really is almost like a step back in time, circa '79-80. Imagine a sound forged from the sneering ore of Abwarts & smelting ennui via early Joy Division. All's I know is that if guitarist Edmund Xavier's spidery guitar runs don't ably channel a young Bernard Sumner, then your name isn't John Jacob Jingleheimer Schmidt (that's mine name too!). Silkscreened covers this time, edition of 500.

And also a BIG THANKS to everyone out there who helped make 2008 a banner year for Siltbreeze. Hope to see y'all again in '09!
Posted by Siltblog at 10:09 AM No comments: 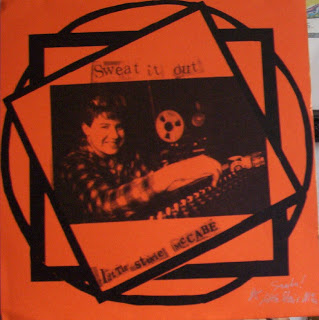 In anticipation of the forthcoming Axemen series that begins next year, I was able to procure the last copies of Axeman Little Stevie McCabe's solo lp 'Sweat It Out'. Released in an edition of 300 in 1986, this DIY/Outsider masterpiece has long been under the radar, mostly due to the fact that for ages it was only available from Steve himself. Soundwise it stands head to head with standout line blurringly great one-offs such as Jowe Head's 'Pincer Movement' & Milk From Cheltenham's 'Triptych Of Poisoners'. Handscreened covers by Steve, includes original insert, I have the last 20 in existence, 1st come, 1st serve. And as an added bonus, Steve took the time to individually autograph all copies so no 2 are the same!
Posted by Siltblog at 10:11 AM 1 comment: