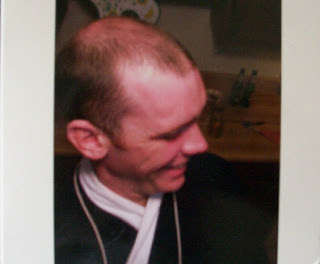 Even before I'd laid eye or ear on this new solo release of Graham Lambkin's I'd done heard all sort've tales surroundin it's existence. My moles deep inside the Hobbit Hole of Underground Intelligence informed me this cd was initially commissioned by agents Tweedles Dum & Dee from a certain Canuck label but then rejected as not fitting in w/said curator's aesthetic. (Long silence. Narrator: 'at this moment Mr. Woodbe has been overcome by great gales of laughter. Coughing & sputtering, it seems he cannot catch his breath & his head has begun to turn a deep shade of red. Hold on, it's blazing into a brilliant orange.....now a piercing white light, and....My God, it's full of stars!'). Whew! Lord have mercy...... pardon the interruption, I'll try & bear this knowledge in mind next time I come across one of their releases STARRING Dylan Nyoukis or..... (Narrator; 'careful Mr. Woodbe, easy does it')......Richard Youngs!! ( Narrator; the torrents of you-know-what are beyond restraint at this time. Woodbe is coughing up all forms of drool, bile, bits of lung, it's horrendous! But for all his histrionic grandstanding I'll have to admit-he does has a point).
WOW....okay, so's next I'm told that this was to be a concept album about Bigfoot what got scrapped. I gotta hand it to Graham here; of all the barleywines out there, that one might be the most recognized but it sure ain't the best. On the other hand, basin an entire cd around the delights of Old Knucklehead would probably give most simps the wrong idea. And besides; they wouldn't know the difference.
I suspect the REAL problem most plebs have w/'Salmon Run' is that it ain't the Shadow Ring no more. Or even remotely similar. What's that old sayin 'don't let your alligator mouth write a check your hummingbird ass can't cash'? Somethin like that. That's sort've what's goin on here; the guy is "commissioned' to do an lp's worth of work but what them commissoners didn't say (yet merely presumed) was they expected something along the lines of-who knows?-'City Lights' or 'Lindus'. Or any of them in between. So from that pov it's easy to see how one (or two) would be disappointed w/what was delivered. Some's out there just want to hold on too long to the baby pictures is all. It's just speculation on my part but don't bet me I'm wrong. Unless you got a thing for losin. Believe me, I deal w/dingbats like this more than you could ever know. But enough of that, hey Mr Narrator, let's row this boat ashore, whatya say? Toot, toot!
To my ears, Salmon Run might be the greatest self-released cd of committed excellence I've seen & heard so far this year. Translation; the guy threw caution to the wind & SPENT MONEY on the thing. It's not some shitty burn in a miniscule edition wrapped in leaves or sandwiched between pieces of particle board held together w/rubberbands. Even a goddamned idiot can open it & play the thing w/o the whole package falling apart or risk of some type've infection. Musically it start's out opaque enough but it wasn't long till I was groovin on the narrative atmosphere & felt like I'd been transported to Hades, witnessed the death of Krautrock only to have it transformed into the nascent blurt of late 70's German experimentalism ala the sounds once found on Dom or Selektion cassettes. The influence of friends & peers such as Scott Foust & Jason Lescalleet is evident too & on the whole 'Salmon Run' is brimming w/a positive & slightly dadaesque ambience that most snifflers in the blubbering "avant noise" cdr scene are just incapable of comprehending. Kudo's to Graham Lambkin for stickin to his guns & seein this thing through the way HE wanted it done. Obviously it ain't for everyone which suits me fine. If your looking for an 'organic brain tangle'' here, you've come to the wrong place. Not that it ain't ponderous, but you won't need no Persian throw-rug to sit on & figure it out. Deer Not On The Sofa you say? Dude, you don't have to tell me twice. I can dig it! For those what's curious write; hawkmoths@yahoo.com
Posted by Siltblog at 10:41 AM 4 comments: 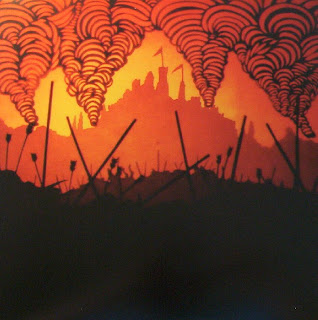 I ain't had much time to keep up on the Siltblog folks, sorry 'bout that. I got the bright idea to attend the Man's Man's Man's Ultimate Surf Classic up to Saglek Bay in Labrador. Talk about cold water! And inhospitable people's & weather.....I do believe I'd concur w/JJ Audubon & say it is about the dreariest place on earth. Local's thought us crazy (we were!) & it weren't long before the whole shithouse went up in chunks. The waves was massive though, but the water so frigid you had to don these special wet suits (w/flipper feet) which made ridin the board near impossible. The event was sponsored but some ultra hush-hush faction of the Canadian Club distillery (or C.C. as they call it up there) so that weren't makin the event any less rowdy. All's there was to eat was smoked cod cakes & some kind've seaweed salad what was doused w/C.C. & vinegar. Whew, it was a chore to get down. It weren't but about 8 surfers into the thing when this local entrant, a Jonah somethingorother (an Inuit fella) got ate & swallowed by some kind've whale. It was a sight to behold! First he was up on his board & as the water began to swell, this massive body came flyin up almost vertical-like & underwater they went! Then a few seconds later up shot part've the board & his feet, like three little party favors. The surf classic was immediately called to an end. Eventually the Mounties come & we's all gave statements & once I said my piece I hightailed outta there to see the U-Boat station (Weather Station Kurt) up to Cape Chidley. It might've been a hoot but the rain & wind was so strong it made the experience a damn nuisance (someone had wrote above a swastika emblem 'Kilroy was here'. I thought that was funny). Later when I was fixin to chopper out've Cartwright I got invited by some Metis fella (I'll call him 'Joe') to a party at a lodge. Everyone was giddy & the C.C. was flowin like water. I should've sensed somethin was afoot. Next thing I knowed, turns out to be some fertility ceremony & I was the one what had to do the fertilitatin! I'd been keepin it to a dull roar but once I figured out the ruse I tried,as delicately as I could,to show myself out. Next thing I knowed I was jumped by a mess've Indians & as I was bein dragged (kickin & screamin mind you) to my...partner....this old tribal woman hauled off & clocked me up the side of my head w/a 3' scrimshaw phallus & opened me up like a watermelon! Next thing I knowed I was laid up in a hospital in Gouldsboro, Maine. The Canadian Club people'd been keepin a watchful eye on me. Once all the commotion happened they raided the place which sent all the participants scatterin. They got me outta Labrador & back here to Gouldsboro where I've been stitched up & am recievin some very fine R&R. I ain't got but a lick've hair & the swellin is so big I look like the kid Rocky in that movie 'Mask'. The pontiff of Siltbreeze went & mailed me up a mess've releases what's been waitin to be blogged & now that I can sit up w/o vomitin, I figure it's time to have a go at the keyboard. I can't but hardly think straight as it is, so this column is just a update sort've thing to let you know what's out there. Once I get my sea legs back, the spleen won't be long to follow. Here goes;


The fella over to Holy Mountain told me about this lp by Chrissy Zebby Tembo, callin it Zambian Psych & he wasn't lyin. Under the name Chrissy Zebby Tembo & Ngozi Family (though it's supposedly a solo deal) this album 'My Ancestors' originally come out in the early 70's & looks like it'd be somethin akin to Fela Kuti or Dub action but it's more like Sonny Sharrock's lost lp for PSF. It's a stone cold killer. Get it via; http://www.bompstore.com/

And speakin of Holy Mountain, a STACK of cd's has come out on that imprint, includin another keeper from Blues Control & a corker from White Lichens. Earth to Robert Lowe, earth to Robert Lowe; Terry Riley called. He says 'you win' & can he please have a hanky? The tear water is stingin his eyes. Go to; http://www.holymountain.com/ order from; http://www.midheaven.com/

Blues Control & Heavy Winged have a split 7" on the Not Not Fun label. Part of the Bored Fortress series, check'em out at; http://www.notnotfun.com/ & see what's ado about athis

Also on the 7" front, there's a new one from Blank Dogs (hot the heels of his 12"), released on the Hozac label. 3 tracks of muzzy mayhem, maybe it's my close proximity to Canada, but this time he out he reminds me of The Braineaters. Go figure. Edition of 400, try; www.myspace.com/horizontalaction

A cd by the Brainbombs has stormed into town, pillaging & plundering all in it's path. This is a volume collecting a slew of 7"er's what's been out've circulation for a while. Is that Freddie Wadling's head I see on a pike? Makes sense to me. Stateside at; http://www.s-srecords.com/ or try www.myspace.com/pollymaggoorecords if your in Europe.

2 new cd's also via the Soft Abuse label, the gurgling electro avant-ruralism of OV entitled 'Noctilacent Valleys' & one from Pumice ('Pebbles') that sounds like our hero has eaten the bread of Gate & drank from the cup of Alastair Galbraith. Sometimes he even breaks out like he stole Bruce Russell's Fire Engines records! The new sheriff of Xpressway County don't shoot no blanks. Great stuff. http://www.softabuse.com/

And the DIY stone just keeps on rollin down there at Hyped2death. The latest Messthetics (#103) is out & is as astounding as I've come to expect. This time it's the Midlands what get's Chuck's expert attention. I can't pick favorite's, they's all good! But it was nice to finally hear (& see) the 1st Digital Dinosaurs 7". If anything, this one's loaded with more obscurities (to me anyways) than past volumes.Excellent as always;
http://www.hyped2death.com/

And lastly, the new LP from Ex-Cocaine 'Esta Guerra' (pictured) is available on Siltbreeze. You can buy it direct here, 15$ ppd US, 25$ elsewhere. Paypal to; sltrx@pil.net or go to http://www.midheaven.com/ where it is also in house. Edition of 500.
Posted by Siltblog at 10:42 AM 2 comments: