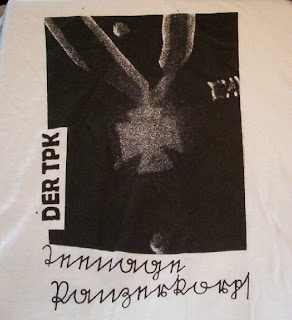 That's right, new shirts, this time for Der TPK, designed by bassist, Boy True. We only did a small batch of these, roughly 12 per size, so it's 1st come, 1st serve. White shirts, black silkscreened ink, pretty sharp if I do say so myself. Sizes are Small, Med., Large & XL. 100% cotton, made by Gildan. Prices are as follows;
20$ ppd US
22$ ppd Canada
27$ ppd elsewhere
Paypal to; sltrx@pil.net
Posted by Siltblog at 10:36 AM 2 comments:

Hardy-har, them folks up to De Stijl likes keepin it interestin. They's is distributin a 7" by a car full've clowns what's eager to pass themselves off as a misbegotten Fuck Off band called Kandalini Nivag Retsevi. Even went & copied the front've the 'Weird Noise' ep as a cover. It ain't all that bad've a reenactment neither. I mean, the fidelity on them Fuck Off (& related) tapes was pure crud, as is this, so if you's was to pitch it to me as '012 chewing through the Gong songbook' I'd be humored enough to work the count. As far as counterfeits go, this 3 dollar bill has some grit. And guess what? Only 200 pressed ( wow, what a suprise!-Capt'n Siltbreeze). Speculators go to; http://www.destijlrecs.com/ for more info.

There seems to be a new school've tadpoles out there what's readily searchin for & drinkin from the bilge pump've feedtime nowadays. But how many of'em can say they's cottoned to an lp by a band called 3 Toed Sloth? Relegated to history's dustbin as a 'feedtime offshoot' in actuality the only thing them bands shared was drummer Tom. Ok, the Sloth invoked a similar lapsarian rumba, but they's also sputtered along on an open plain what's only other antipodean inhabitants was maybe the Gordons. Existing for a minute in the early 90's, the band sallied on long enough to release one lp before makin themselves scarce. But like the bard said, 'you can't keep a good man down'. The fella what cracked the whip back then was one Andrew Robinson & not only is he armed w/a small load 've recently exhumed 3TS lp's, there's also a new imprint (called Great Dividing) & a couple've 7"ers for the hawkin as well.
The 1st what I heard was via an outfilt called Exiles From Clowntown ( what'd you call me?-Capt'n Siltbreeze) & on one side they's graze in a pasture what's diabolic root has discordantly spread 'n become more the norm than the exception in corners've the current Oz fauna, right down to the rhetorical poetics. And the Exilers chew it like champs. The flip is one of them instumentals that thrive in the post, post VU sub-tropics of the southern hemisphere. It's strumble could best be articulated as traipsin over a 'bridge to nowhere', one where everybody from the Clean, X, Bilders, Eddy Current to Exiles From Clowntown have & continue to cross with remarkable elan.
I'm takin a wild guess that arob is a Exiler & hell, for all I knows he may even be (or have been) a Mu Meson. I mean really, 5 years to complete a track? Anyways, it's finally seein the light've day on this split 7" & as such is now a collab w/another mysterious lunk what goes by soottyb. Entitled 'They Sent Me Into Space Today' them two exude some sci-fi percussive/synth bork that blot's yr ears like an extraterrestrial beam from a Jupiter moon. The other track is solo arob w/guitar + a field recording of Cicadas. I have found it to be a most befitting soundtrack for our evening ritual've muddling lime & mint in preparation for the pre prandial round've Mojito's. 'Nothin like a swarm of pestulance to herald in the evening cocktail hour' sez me. Indubitable at either 45 or 33 rpms too. Glug, glug, I'll drink to that! Not many of these was made, go to http://www.greatdividing.com/ for purchase & don't be afraid to pester Andrew about them 3 Toed Sloth lp's neither. It's worth your peep.
Posted by Siltblog at 8:58 AM 3 comments: 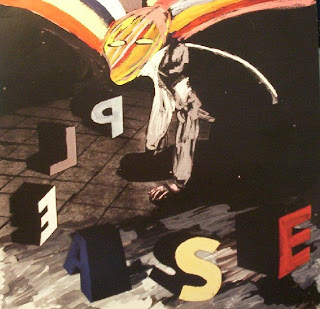 There's some've us what's been waitin eons for the Brits to get a leg up in the whatsis of current underground shenanigans. Shimmy Rivers And And Canal looked promisin but never followed through, them Pheromoans got the moxie & I'd bet they's just 7 (or 12) inches away from deliverin a satisfyin platter of pasty spew. Then outta nowhere comes a bunch what's called Please (not to be confused w/the polite, lisping boys've pop-psych legend) whose wriggle on this self released 10" is both rancid & snotty w/invasive thrusts that nose around yr business like some've the better Ron Johnson bands of yore (I'm thinkin the Shrubs or A Witness). Them bands (along w/the Membranes, Sperm Wails, Kilgore Trout, etc) created alot've distemper on Ol Blighty's shores in the late 80's & in fact they may be the last pertinent generation to make such a claim. I knows it don't sound as hot as callin'em the next Danny & The Dressmakers but likes I always say; what the hell do you know? Line up your go-carts here; http://www.ouse.org.uk/ or; mkasparis@yahoo.com


Excuse me for sayin so, but when I first got a gander've the goobs what make up Dead At 24 I thought I was lookin at a Speaking Canaries tribute band! And seein as how they's both (at one time) Pittsburgh related, it didn't seem like a stretch. But nerd glasses 'n pencil necks aside, that's where them comparisons end. Dead At 24 wears a rustbelt heart proudly on their collective sleeve; the name is a reference to Pete Laughner & his age of death + much've the musical vibe herein is pumped w/a pulsing heart of darkness. Lot's of the lyrics sort've remind me of one've the Klimek's too, I just ain't figured out which. From what I can glean (accordin to the 8 page booklet enclosed), this 'Blast Off Motherfucker!' lp was originally a cassette released in '96. I would've reckoned sooner as such a big gob've the b-side sounds painstakingly cut & pasted off've Dead C's DR 503 lp. But hey, even then there weren't a whole lot've Dead C worship, so I ain't gonna ride'em too hard for it. At least they wasn't sittin around aping Spacemen 3 (ding!). My fave track on here is 'Breakin My Heart Again' where's they crackle like a Culturcide bonfire surroundin a Christchurch garage what's been transported to the Flats've of Cleveland. The rest.....let me say that for the most part I'm charmed by their nascent hubris & determination. Plus I think it's great someone gave the green-light to this as a worthy vinyl artifact ( much like that Lames one sided deal released last decade) even if it's 10+ yrs after the fact. I'm guessin their Theiner connection's was slim at best, but hey, PGH is only big enough for one dweeb at a time to parade around in a Ramleh t-shirt, so whatya gonna do? 300 pressed, check; http://www.ridethesnakerecords.com/
Posted by Siltblog at 9:55 AM 3 comments: