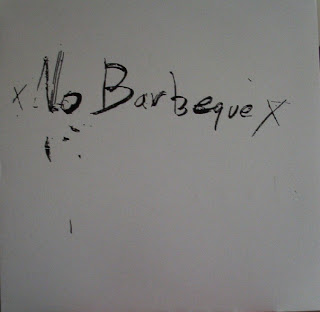 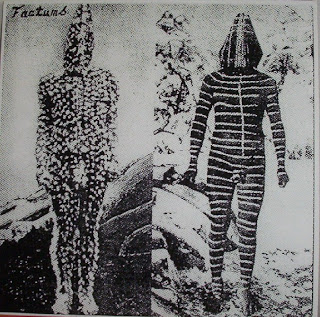 Two new releases out on Siltbreeze, both are VINYL ONLY in edition's of 500, each cover handscreened by Mr. John Sharkey (of Clockcleaner fame). Factums are a Seattle (& Chicago) trio who blat out an awesome junkoid rumble akin to early Punk/Noise purveyors ala Cabaret Voltaire, Residents & Chrome. They claim to have ties to A-Frames & The Intelligence but we signed'em anyway. Ding! XNo BbqX is the gnarly moniker for a duo of Aussie thud-humpers whose sheer crudeness is a MUST HEAR for those who want to listen. Imagine Harry Pussy & Mouthus taking turns fellating Xenakis. That's a lotta protein folks, Vegan or otherwise.

If you want multiple copies, contact us 1st. Paypal & email to; sltrx@pil.net

The Power Of 3. Or 4.....New Lp's from Nisennenmondai, Lichens/Lexie Mountain & Circle Of Ouroborus 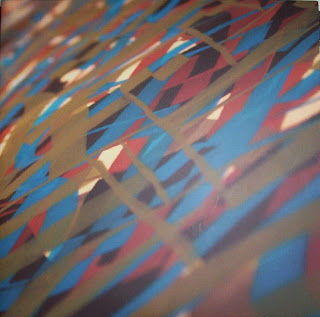 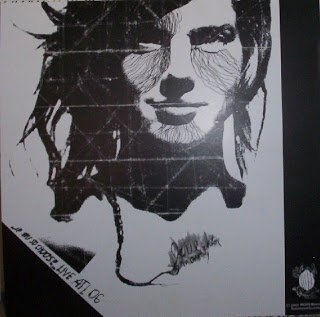 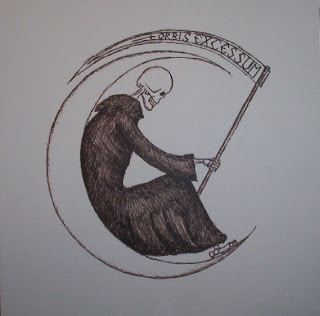 I wasn't so sure I'd be comin back to this Blog. No foolin, that trip up to Camp Century 'bout did me in. I know's what you's all thinkin; ol' Woodbe went & overdid it, life of the party 'n all that. Nope. Besides, they's now banned alchohol on ALL the premises. I was dry, D-R-Y. No, that ain't the case at all. You know that old joke that ends, "rectum? damn near killed'em!"? Well, that's sort've what I went through. I ate so goddamn much Spam that my colon got impacked & my rectum-literally!-damn near killed me. It's my own fault & I knowed it, but this Basque fella they got cookin there now-Chef Cenasio or somethin-man.....he was doin it up! There was Spam terrine's, gratins, loafs, dips, empanada's, fritters...you name it, that funny talkin little guy could prepare it. He would sorta laugh to himself, shake his head & whip up these amazin eats. All's any of it ever seemed to be was potted meat, processed cheese & onions, but he'd change the spices & herbs-as well as the presentation-so's it seemed like it was somethin new every meal. Then one day he says to me (loudly I might add) "Senor Woodbe, why is the Spam? Everything-Spam, Spam, Spam. I am go crazy! At least w/Baccala it come from the real fish. American diet.....is an irony, yes"? He had a point. Plus, since I'd been away from this kind've eatin for so long I guess I was more susceptible to gastronomic malfunctions. Then the one day come where I was sitting there gourgin myself on a plate of a baked Frito & Spam-cheese "pie" & suddenly I felt these cramps & it seemed like I was gonna implode. I got the sweats real bad too, finally someone realized I wasn't clowin around & got me into the infirmary for a checkup. The doctor asked me when was the last time I'd passed a stool. I shot back 'I must've passed a whole mess of'em on the way in here doc!' but ain't no one laughed. Truth be told, it had a been a few days. Actually, I'd yet to snap one off the entire time I'd been there. I hadn't thought nothin of it but now I knowed it was serious. I started to think about that urban myth of John Wayne havin 40 lbs of feces impacted in his colon when he died & that got me worryin something fierce! But I'm sure you can find them gory details somewhere's on line. At any rate I had to ge the fuck outta Camp Century & into this holistic facility. Let me tell you's all this....if I never see another raw carrot as long as I live I'll die a happy man.Same goes for an enema bag or a set of rubber gloves. And you know what you can do w/that ginger/beet juice too. Once my new diet was in place I got to feelin rode hard & put up wet. I got so's I couldn't even blink my eyes without it resultin in a squirt. Ugly ain't the word for it! Bottom line is this.....I'm back in action, 20 lbs lighter & 100% better. I learned some very valuable lessons on my colonic odyssey but they will all come to naught next time I'm standin in line at Pat's waitin on a steak. For the record; I's likes mine w/whiz, roasted hots & onions. And despite how's that might sound, I ain't never met a better plumber. But enough talk about my asshole. Let's get on to some records, what'ya say?

Nisennenmondai is a female trio from Tokyo that I'd never heard of till this dbl lp come callin. Basically what's workin here is the label, Heartworm Press, went & compiled 2 of the band's previously released cdr's (from 2002 & 2003 respectively) into a spiffy gatefold vinyl package & it's a dinger for sure. If you's anything like me, the mention of an all girl Japanese trio conjures up vesions of Shonen Knife or maybe Aunt Sally & I ain't about to harangue either of them, but the novelty & cutesy-pieness of both of them goes a long way in the book. So long in fact that I don't-currently-miss hearin either of 'em. Nisennenmondai however is about as far away from pop-punk as you could imagine. Instead these women burrow across the landscape like a tornado of Rec Rec/R.I.O. sturm (I'm hearin Unrest or The Work indirectly) & Majora-era Sun City Girls improv drang (I'm thinkin 'Dawn Of The Devi' specifically). Of course, some of the song titles-named after presumably favorite bands-probably give us a clearer insight as to where Nisennenmondai is really comin from but whatever...it still works. A very heavy hitter that I'm glad to know is back in rotation, even if I never knew it was before. Dig? Go to; http://www.theheartworm.com/ or http://www.nisennenmondai.com/ for more info.


I'll admit, the split release has always carried a baneful stigma to my mind & I'm goin all the way back to the Fanatics/Nervous Tension 7". I don't know exactly what it is I don't cotton to, maybe it's the shade-tree aesthetic, like each band is too lazy to pony up a proper full tank've snark, but whatever it is I'm surely in the minority. Nowadays there's miles of'em & while most don't get past the intial listen (in my compound), there's always that one what floors you like a ton've bricks. I was prepared to dig Rob Lichens side on this thing released by the Hoss label, cause, you know, the guy's a talent & so far everything of his I've heard to date has come up aces. His track, entitled 'Restoration Of Temperment', is a plateful of lovely scutter that sounds like a Nova 'Billy lost in that mirrored room on the cover of Fripp/Eno's 'No Pussyfooting'. The minutes fly by only to burst into spires of light & radiating hearts palpitate cool, Saxon(ish) blood that coarses evenly through the veins of the composition from beginning to end. Young Werther ain't got nothin on this guy! But the blindside on this record came from the reverse, by someone called Lexie Mountain. I suspect she's done been tenured at the Academy of Snooze Weird America but that doesn't mean she can't bring home the bacon. On this sidelong track ( 'If You So Choose', recorded live) she done slaughtered the whole hog! If I didn't know it was a real who-dey in action I'd have swore it was Helen Suckpuppy, all growed up, having a Diamanda breakdown during a recitation of the Karen Ann Quinlan Diaries. Taste the sweet nectar of another gin & tonic, hear the slurred, rambunctious verbage of a quaalude kickin in on top. The question that never get's answered is this; what was playin before the blackout? Sabbath or Zep? See, that's why split lp's suck. But hey, this Lexie Mountain....she's onto somethin. In the parlance of Phyllis Stein-Novak, I give her 3 tips of the toque. Check this out here; http://www.hossrecords.com/


Some Black Metal I've come to find ain't so black. Or even Metal. Not least by my ear. Case in point is this lp from a sparse (maybe even solo venture) Finnish outfit what's known as Circle Of Ouroborus. On this 'Shores' lp CoO eshew anything I would hold up as 'authentic' Black Metal. They bring the gloom alright, but the vibe is way more post punk w/a very lo-fi production level (that I dug) & the laconic nature of the vocals combined w/the smash-mouth, no frills, straight ahead instrumentation (especially durin the cover of Joy Division's 'She's Lost Control') is enought to make both Metal dudes & Goth creeps bawl w/confusion. If anything I'd call it Outsider Metal but I'm just a contentious bastard so there. Sue me. Here's hopin it will one day reach the pantheon of greatness of it's supposed genre in the same way as Kenneth Higney's 'Attic Demonstration' & David Welch's 'Blue Lightening Accent' have to theirs. It's a keeper.Try http://www.northernskyproductions.net/
to see about availability