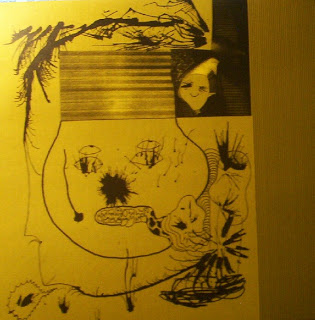 "It's that time of year again when…." is alls I've been readin lately. Same old preamble to the same old thing; best of year lists. And there ain't nothin wrong w/that. Folks wanna fuss about tryin to contain a few special things for others to savor, concur with or ridicule, it's their prerogative. I just ain't got the inclination. I heard lot's of swell records, most of'em comin off the Siltbreeze imprint. I ate lot's of good food too, most of it by my own hand. Times I went to the place for the thing & got the stuff, I can't say I didn't enjoy myself. Sometimes it was fancy, others, not so. I seen me some good live shows as well, but hell, just about anytime I can get out to see live music it's a special occasion. Besides that….
I would like to take this opportunity & say thanks to Times New Viking for helpin engineer the Axemen's US Tour. Also to anyone what bought a record on Siltbreeze or went & saw a band what's flyin our colors. On the expat front, It's been a goddamn hoot to see people shittin themselves over Bill Orcutt's lp though personally it ain't no surprise to me that it's as good as it is. Same holds true w/Graham Lambkin's newest cd.
But the real reason I came on was to say my absolute favorite thing-record wise-that has me astounded in the last fragrant fumes of 09 is this lp by Kito-Mizukumi Rouber. They's a Japanese trio & if you's know anything about the Nippon undergrounds it's that thems that excel take whatever it is that's their "style'-be it psych, blabber, smoke, noise,or scuzz-& stretch it, nay, ABSORB IT ,only to regurgitate the guts back out into some kind've unique & brain scramblin mutant code speak. And Otonaki Touge De Hagureta Kmr is just about the most deleriously wrecked thing to come out of the land of the risin sun since…well, how about ever? Imagine some Kabuki crime wave dusters what's like the livin embodiment of Danny & The Dressmakers. More, how sick would a comparison of Shockabilly coverin the Shaggs sound? Or vice versa. This spastic masterpiece is all that, all that & more. But I can't aptly describe the more as it ain't been deciphered. Not yet. Not on this planet anyway. My old campadre Jim Shepard once asked "When they finally come, will they be metal or meat?". Well James, they's is here, callin themselves Kito Mizukumi Rouber & the answer to yr query-as near as I can figure-is BOTH. This is so far beyond the pale of in-the-know Blobber & Twatster snoots conception of formidable kookery that it ain't no wonder they've kept their heraldin to a dull roar. It's too much for'em. Some of them bo's would have you believe they eat this kinda Gorp for breakfast, but believe me, one dose of this & they wouldn't even be able to pony up to the table. The #1 monster of 2009 & only by about 10 miles or more. Thanks to Ultra Eczema for releasin this Bear. Surely limited,Dig it here;
www.mimaroglumusicsales.com


And a Merry Christmas & Happy New Year's to all.