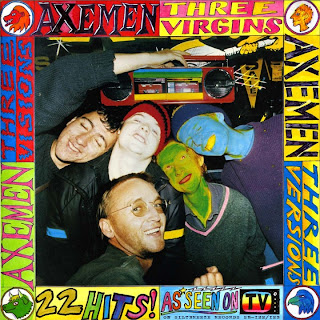 FINALLY! After a couple of years in the RE-making, the Axemen's legendary dbl lp '3 Virgins, 3 Virgins, 3 Visions' (hereafter known simply as 3V's) is available for order. Originally seeing the light of day on the Flying Nun label in 1985, 3V's is a broad canvas of sound, seemingly channeling other likeminded cornerstones of fringe rumble such as 'Trout Mask Replica', 'Exile On Main Stree't & 'Tago Mago'. Just like last time (remember?) this is a limited edition run of 600 & housed is a stunning full color gatefold sleeve. Prices are as follows;
20$ppd-US
24$ppd-Canada
30$ppd-Elsewhere

Add to your order both previous Axemen titles; 'Big Cheap Motel' lp + Scary,Part III double lp for only 15$ more! No extra shipping cost either!That's 3 more lp's! What a bargain!
(Just make sure to mention when ordering).

*AND WHILE YOUR HERE*

Check out this AMAZING 3 Virgins promo film shot back in the day by Lawrence Lens (Nux Vomica, Portage mastermind);
http://www.youtube.com/watch?v=Yv-iM_1h5uA
Posted by Siltblog at 7:50 AM 2 comments: 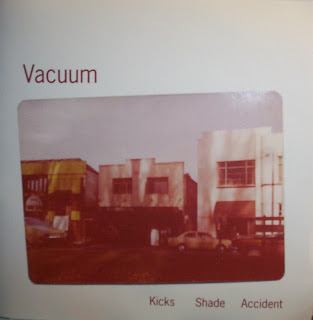 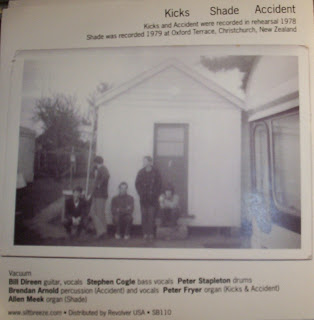 SOLD OUT
Although they only got a couple of spins around the earth's axis, Vacuum were the band who wrote the clay tablets from which all great Christchurch groups worth a plug would glean substance to formulate THAT sound. Originating in 1977 & consisting of members Bill Direen, Stephen Cogle, Peter Stapleton, Peter Fryer & Alan Meek, Vacuum perfected an aural symmetry that fused classic Nuggets, Roxy, Elevators & Velvets moves as a template & this unique plonk would become germane for all that sailed after. Deep collectors will recognize these tracks by name from various prior releases, but these particular recordings-culled from 78/79 rehearsal tapes-are being made available here for the 1st time, EVER. 'Kicks' would go on to become an early staple in Direen's Builders discography, but the guitar on this version is particularly & wonderfully unhinged. The beautiful serenity of Cogle's 'Shade' - masterfully driven by Meek's keyboard--is as crisp out of the gate as the later honed version familiar in the oeuvre of the Victor Dimisich Band. The real thunderclap of the bunch is 'Accident' (another take can be found on The Builders 'Beatin Hearts' lp) where it sounds like someone spiked the Tia Maria with peyote & as a result, the band has psychically disemboweled 'Heard Her Call My Name' & fed the guts to Amon Duul. I've said it for years, electric liqueurs don't lie!
One time edition of 300. File alongside; Six Impossible Things, Pin Group, Builders, Victor Dimisich Band, Above Ground, Scorched Earth Policy, Dadamah & Terminals.
Posted by Siltblog at 3:20 PM 1 comment: 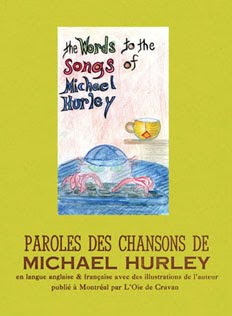 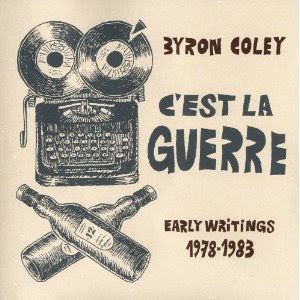 In my time I have told many Canadian jokes, knowed many Canadian jokes & quaffed many Canadian beers (even 'skunked' Mooseheads) so I think I can say without equivocation that the Montreal imprimatur, L'oie De Cravan, ain't none of these things. To prove as much, they's has up 'n flug out two great collections of written words by a couple've fellas that's know more about what happen's at third base than either Brooks Robinson or Eric Weber. And that's a lotta ground, hombre, so take notes.
First up is a slim volume by Michael Hurley, one of America's most well loved rascals.Everybody's crazy about him, from Cat Power in NYC (whose covered a tune're two I's been told) to Esto Setty over near Lynx Prairie (who sold him some cider blocks what I seen myself). And since I know's you's all know's who he is, I ain't gonna ramble on about his discography 'n such. It is without peer. This book what's title in English, (bein that these bks is from Montreal-the hub of the QC-they's also French translations as well, viz, bilingual) is 'The Words To The Songs Of Michael Hurley' & it couldn't a more handsome chapper. L'oie De Cravan done this up swell; alls calligraphed by Doc Snock himself + what's also occasionally accompanied by colorful illustration're two. My favorite'd be 'Ohio Blues' what's from the 'Sweetkorn' cd. Why? 'Cause I's been to Portsmouth O-Hi more'n enough times in my life & if Snock don't nail the grimness of that river town (& the desire to flee), then I ain't Kentucky's most forgotten boy. Dead on forward notes by Byron Coley too.
And speakin of Mr. C, this next book's all by him! It's name is 'C'est La Guerre; Early Writings 1978-1983' & it is a tottlin ride through the LUSH green pageantry've the Samuel Pepys of Amercian Punk. This fella damn near single-handedly chronicled EVERY vinyl spurt what was in the buddin years of Hardcore, not to mention carryin on about all manner've noise yokes what almost no one else gave shit, let alone champion. Neither Bushwacker nor Jayhawk, he seen the intrinsic GOOD in most all comers-no matter they's burden-& any what followed his hunch was better for it.What you's get here is some letters, photo's 'n illo's, cherry picked reviews what was run in NY Rocker, Take It! & LA Reader, basically an all encompassin tableaux into the burgeonin (yet already keen) mind of one the best set've eyes 'n ears ever to peep 'n pop in the dank culture of anyone's Underground. I would've liked to've reread that Flesheaters diary though, maybe next time.
Mike Watt waxes poetically in the introduction like the imaginary son of Jack Kerouac what ate one of Robert Creeley's Sunday chickens. I was near driven to a fricassee, but in honor've all's, I opted instead for a cauldron've poutine (extra curds if you will, Garcon! Gravy too!) & a confiscated keg (my people's in all the right places) of L'amere A Boire pilsener. After all, it is Spring. Gotta start thinkin LIGHT.
Contact via; lent@oiedecravan.com & http://oiedecravan.com/
Posted by Siltblog at 6:39 AM No comments: 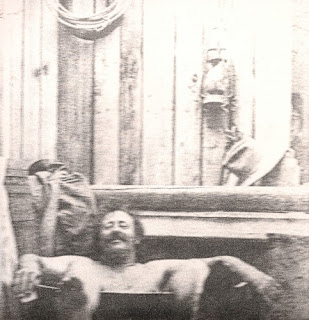 Before rock-fluff wimps had to codify it as a genre so they's & other likeminded weakings could come to terms w/the phenomenon known as Guided By Voices (primarily), 'Lo-Fi' was just an accepted outlet of expression. It didn't need no definition, it weren't a miracle, simply, it was just another anonymous workin stiff in the musical milieu. Some's referred to it as DIY, but that acronym was usually slotted for UK bands from a specific era. Shamblin, theadbare, amateurish, these was all traits what could be associated w/self released records 'n bands, even now. But since the mid/late 90's, 'Lo-Fi' has become alternately both a blessin & a blight when it comes to Pop consciousness. By it's very existence it has suffered (both pro 'n con) the idiocy (& fools) of musical gentrification. It can't just BE, it has to BE SPECIFIC. Branded if you will, the final insult. It is the way of the world, you can't get around it. Well, one can, but they'd have to come live here with me. Which one can't. 'Cause if that happened, they'd soon disappear & unlike "Lo-Fi' the chances of anyone ever hearin from you again would be nil.So go put that in your Fader 'n smoke it.
Lordy me! Am I ridin a high horse or what? Must've gotten up on the wrong side've the hammock today. But it ain't like I'm spoutin bullshit. I reckon the worst part've the whole business is how now you's got bands tryin to purposely sound shoddy cause they's think it's hip. But what do I know? I'm an island dweller & couldn't give a goddamn about any of it. I like what's I like cause I like it. How's that for defined?
And you's know who else's of the same mind? Mad Nanna. They's function in the Albert's Basement universe down to Victoria, Australia 'n the spuzz they's released on this 7" is a dandy. Even in a country w/a scene that's blowin up like the Oz one is, still ain't no one what sounds like'em. Imagine if that band, Even As We Speak was struck by lightnin & on account, forgot all's they ever knew. Upon relearnin to play, they's used a cassette recordin of File Under Pop's 7" for inspiration which went beyond therapy 'n became THE GOAL. It also kinda sounds like a Falling Spikes bootleg what had been caked w/mud & laquered onto vinyl. Definitely Lo-Fi, doubtfully hip. No matter, it's still a glass what's half full of life's lemonade that's sweeter'n a Soave spritzer. Glug, glug, glug.
Find out more here;
www.albertsbasement.net/mad-nanna/
Posted by Siltblog at 12:06 PM No comments: