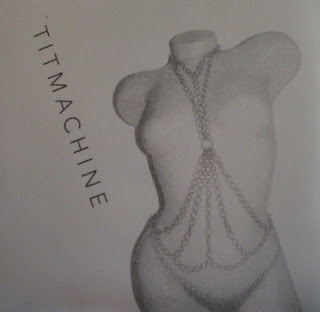 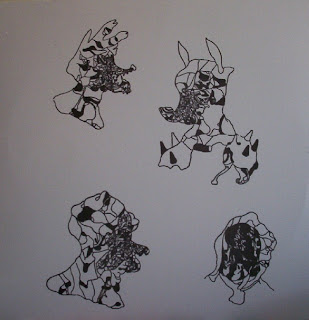 I know I've done railed on about my disdain for the split release format but it ain't like anyone's payin said bane much mind. Hell, you got labels like Not Not Fun doin whole series of split 7"ers & while they's is gobbled up (by speculators 'n fans alike) it don't mean they's good. But that's just an educated guess on my part as I don't own many. I reckon you get more bang for the buck, but mine's just break down to the 'good' & 'bad' sides. So bearin that in mind, I'm payin twice as much for what I like. I enjoyed that split lp last yr from Lexie Mountain & Lichens but to be honest, I could've used 2 sides of each. So again, there's a short shrift. Mind you, this is all petty complaints & there's them of you out there thinkin ol' Roland Woodbe is just whinin for whinin's sake. Not true. I'm just callin attention to a trend what I reckon to be lame. It's not like I'm gonna cut off my nose to spite my face, after all, I still buy'em in hope's of gleanin that diamond in the rough what's likely to appear every now & again. Case in point is this split lp from 2 Providence, RI artist's, Blueshift & Russian Tsarlag entitles 'The Burrow'/'Thank You For The Plastic Surgery You've Given Me'. Since they's from Providence & both been tagged as 'weirdo's it's a safe bet to presume they's both art school attendee's, graduates or dropouts. You get a letter pressed jacket + saddle stitched 32 page booklet w/assorted visuals, then there's the green vinyl lp which beholds the aural work of each. Can't say that Blueshift's improv violin scrape & assembled threadbare gloppage did anything for me but hey, if you still wax your pole to the itinerant heaps of piffle laid out by former Chocolate Monks, current Zaimphs, erstwhile Ashtray Navigators & the like, then there's a fat chance your gonna find this incessant filibustering potentially erectile.Me? The 1st thing that crossed my mind was it seemed like a good time to clip my fingernails. So I did. Then I flipped the record.
Now Russian Tsarlag is a whole different kettle of fish. He's got a pretty good grasp on humor, darkness & applied weirdness. His sound calls to mind the halcyon days of the early 80's when there was a small (but formidable) assemblage've roustabouts what fell outside any specific pecking order, hybridizin art/avant/industro squelch through the punk filters (which got'em tagged as weird), thereby isolating themselves in a cool corner of the scene that only a few of us embraced back then. I'm thinkin (early) Culturcide, Iceplants, Tom & Marty Band (to name a few). These folks def. fucked w/the rules of what was what & while that perhaps marginalized'em to the (then) arbiters, I was drawn to their skewered genius like a bear to honey. It was stuff that embodied a certain DIY aesthetic, as well it had to since nobody else was gonna touch it. It's still hard to say exactly what that sound was since it drew from so many wells, but Tom & Marty Band's credo was "We heard Chrome & Throbbing Gristle & thought they were pop bands' so maybe that gives you some idea of what I'm gettin at. They took Dada all the way to Mama & back (if you catch my drift). Nowadays with so much what's been done ( to death in most cases) in the underground bein pleasantly suprised by somethin like Russian Tsarlag almost makes me wanna take back all the shit talkin I done about the split release format. Almost, but unlikely. I could do w/out the Beach Boys cover, but I'm not gonna split hairs on account've that. I'm glad to have found the dude & I dunno, if you like the lines blurred & the zozzle zonked, Russian Tsarlag has some tunes for you to hum. Only 300 made. Find this via; http://www.rareyouth.org/
Posted by Siltblog at 8:08 AM No comments: