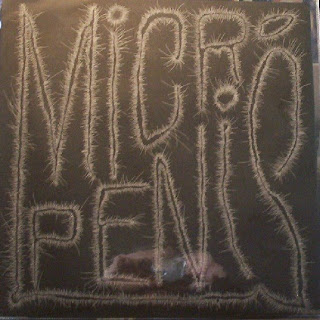 I'm one of them guys that just don't get no amusement out've the word, Penis. Yep, don't think it's funny, never have. So's bands like Afternoon Penis, or Broken Penis Orchestra, them releases got cursory listens & then was filed into one of my billions've 'no thanks' galaxies. Call me a prude, hey, call me whatever you's will. That said, I never thought Dick Urine was that funny either. In defense I'd admit to bein an avid Rudimentary Peni fan, as much for their music as the ridiculous latin turn-of-phrase.But them's salt's to be soaked another time, what I's tryin to get at is when this feller Fred told about an lp of careless Peugeot drivers from Mulhouse what call themselves Micro Penis, well, I didn't exactly get wood, if you catch my drift.But then it showed up,and,well.....I had to admire the Nick Blinko-esque artwork & packagin, but also wonderin that if I just ignored it, might I be (whew!) dodgin some Peni inspired crud-core bullet (low expectations 'n all). But a glimpse onto their 1 sheet & a spied reference to Cromagnon's "Ritual Feast Of The Libido" & then I was suddenly piqued. After all, if you's is pullin out them guns, you better not be hornswogglin. And thankfully it ain't. Sure, it's brimmin w/the inscrutable art brut, cut up, sound collage dadaistry so primitif & splendid in the current wave've contempo French underground (El G & Oso El Roto for example). But unlike them phlegm chewers, Micro Penis stay the path of "organic" aural lobe snippage (ala Cromagnon) w/o any use of standard musical templates, be it blues, rock're what have you. This dude just beltches up the gut gas, refluxes that're both psychedelic 'n psychotronic, like if Fille Qui Mousse's 'Trixie Stapleton 291' mugged it up with Hershel Gordon Lewis' 'Blood Feast'. It's hairy, improbable, preposterously deranged & just the slightest bit sinister enough to make you think "this can't be happening to me". Oh, but it is! The perfect aural influenza for your next slumber party, choke on it here; www.rrrecords.com or direct to; http://virb.com/micro_penis

Lookin at this Work/Piles split lp I was wonderin how they's was able to afford such substandard Pettibon cover art. But then I realized it weren't his, or so it says in the insert. Truth be told, I was kind've relieved, as most of Ray's work what's not SST insinuated has been for some real less than lesser acts. And if a picture's worth a thousand words, well, I done got diarrhea of the mouth! Anyhows, it's the music what we's after, correct?. But, but, but…. Work is some (wait for it) out of work noise artists who I reckon thought they's could slum it as lo-fi No Wavers & it wouldn't surprise me none to find it's fooled some. Sure, it' got all the right trappings-short songs, punch, vim, vinegar, man, woman-but it just seems so obviously connect the dots that one can't help but laugh or ignore it. And I did, one after the other.
Piles is a 'nother kettle of fish, though I ain't sayin they's keepers. Same masculine/feminine dynamic (for lack of a better term) but an altogether stylistically hackneyed, going for it, outsider result; a snort've Billy Synth, a bump've Leslie Q, you get it, right? Gone is the days wheres I could listen to others thump a chest proclaimin which LQ lp was best. And then it was genuine appraisal, but it weren't no more interestin (to me) than Piles clumsy, organ chorglin enzymes that could. Or perhaps conjure up what you can recall from early Guv'ner, but nowadays a version most likely to inhale a burrito than inherit a trustfund.Ya hear me? But it's alls about who you know 'n like I said, there's some what's plum ecstatic by the tired warbles've both entries. And that's ok. They can feed the birds their way, I'll feed'em the truth. Ding!
www.myspace.com/workishard & www.myspace.com/pilessf


Been recievin more'n my share've emails from folks askin me my thoughts about Bill Orcutt's new lp. That & sendin me recaps've lengthy pastey-pie reviews & dandy doodle retorts. Shit, lookin at all the fancy name droppin & arid commentary, it kinda took me back to one of them Norman Mailer/Gore Vidal spats on David Susskind! That & them editorial hissy fits what Phillip Rahv 'n Delmore Schwartz'd get into at the Partisan Review. No matter high up the brow you get, it's never not entertainin.
But that's them. As for me, I'm sizin up 'A New Way To Pay Old Debts' from a number've angles, a somewhat modernized Pincer Movement you might say. First, it's hard not to give it a broad (yet accurate) stroke as Harry Pussy Unplugged. Cheap as that assessment might be, it's hard to deny.And what's wrong w/that? They was as formidable & broke down the genus of Rock as much as Blll does here to Blues (which begets____). Bearin that in mind, it's sort've like them Planet Of The Apes movies, you know, where the present is the future & you have to work backwards to see how it all came to pass. Right? Sounds good to me!
Or just dump it in the lap've Rabelais, THEE greatest satirist of all time. That same sort've reverse narrative skippers the Gargantua books. Ye, lest I get tangential, what I'm harpin on is whiles some of these string benders can be downright "Catholic" in technique 'n delivery, I sees this lp as an embodiment of the 'Do What Thou Wilt' sentiment expressed by Pantagruel & his buds. Some's find it astonishing. Me? I'm enlightened. And (at times) amused. Dr. Orcutt cuts a plucky rug as a regular goddamn Neo-Renaissance humanist. But I wouldn't expect anything less.
And there's the whole Archangel notion; various sacred pickers 'n players metaphored as Gabriel, Michael, Raphael, Uriel (benders to halo's of your choosin), etc. Go ahead, call'em out; Fahey, Reichel, Bailey, Hopkins, it ain't like I's come up w/this on my own. Hell, (get it?), I'm taken ol' Bill here as Lucifer. Not that he's been cast out've nowhere, in fact, it would appear that the Huggers of Hollowbody Heaven can't behold him enough! But there's somethin devilish in the playin on this & you don't have to be no Father Merrin to hear them licks.
An that's alls I got to say on this tater. I know it's just a bunch've bugaboo, but ya gotta admit, it beats workin for a livin!
So dig this; A New Way To Pay Old Depts. It's a fine record, whether you get it or not.
http://palilalia.com/
Posted by Siltblog at 11:44 AM