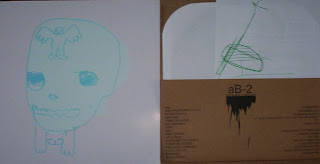 I can't speak for the youths of today, but not that long ago if one was to get embroiled in a jaw about Australian Punk & whathaveyou's, you'd more times than not find yrself listenin to gab about Radio Birdman, Saints, Scientists, Birthday Party, maybe even SPK if someone in the room was sportin leather jodhpurs. And there weren't nothin wrong (Grong?) about that, in fact, only a fool would deny any their high placement in a fanboy's peckin order. But the country's scene burned bright from all corners left of the dial, whether it bein the aforementioned or equally lethal, yet more obscure talents that lay just beneath the untamed savannah. The recent M Squared boxset released by Vinyl On Demand is a good example, but also great cd comps from recent yrs past such as Can't Stop It!, Murder Punk & Shakedown (to name a few) have archived/revived the shambling, twee, art damaged, erratic, eccentric, punk, post & puh sounds of yore, stitchin together a between the lines history of the continent's teeming cesspool of talent. And it's just kept rollin, I mean, the names have changed, but the OZ underground seems as formidable as ever. Tons've bands, lot's've small labels, hell, most is even takin the plunge & gettin vinyl out (again). So when I seen these 2 comps listed on the Tedium House site, I was more than intrigued. Released on an upstart label called Albert's Basement & documentin the vibrant Melbourne scene, they's simply called '02.06.07 & 'The Warm Cupboard'. The emphasis (on 02.06.07 esp.) is post twee, bedroom pop (recorded live to computer in said boudoir) of a distinct K variety, but the overall joi de vivre of the thing reminds me of old faves like 'Alive In The Living Room' & maybe even the X/pressway Pileup cassette, seein as how new & excitin all that seemed at the time. There's a fragile unsteadiness to all the performers,yet the needles get thread but good & the recording is standup for all. Not to cast stones, but as jinky as Extreme Wheeze's ode to Scrubs is, it don't come close to Meatus Murder's opus roast to said drama (just sayin is all. And givin props to Meatus Murder, I mean, who's talkin about them anymore?). If your go-to box've vinyl includes the early Go Betweens, Particles or Cannanes, yr gonna want this pronto. Comes in a cool, handpainted jacket, insert for followin along, all's that's missin is some vegan recipe cards.
Entry deux-The Warm Cupboard-is more posh in sound as well as contributors. At least on this one I knowed a few of the dropins ( Hi God People, Fabulous Diamonds at least). This one lacks the cuddly kitten cuteness of the previous release, but I think that's called variety. Since this one is tracks supplied by the various bands, it's an oddsbodikins of hoo's & howls. There's even a couple of pro soundin indie blingers that should have Pitchfork plinkers doin pecker pogo's when they discover this , on their own of course. Some cool instrumental swirls & squiggles via Free Choice & Aux Assembly that almost sound like they could've been culled from long lost Innocent Records masters & the last band, Bleak Infinity bring it all home w/some mangy blather that sounds like a Royal Trux/Magic Markers freestyle. And of course the tracks w/Hi God's & Fab D's. Perhaps not as ear poppin as the '02.06.07' one but no less entertainin. And the price is right, so why not spring for both? The cover on this'un ain't as bode neither, but the insert has hand drawn abstracts to keep'em individualized, so there.
Yep, lots doin in Lager Land & we'll see where Alberts Basement goes from here. One of these days I gotta get down theres & check it out for myself, but until then, it's ears only at;

or contact these vegemite nibblers direct at; mike_zul@hotmail.com
Posted by Siltblog at 10:57 AM

you Sir,
are on a roll this year.
only 21 more post to go and you will be eclipsing last years postings.
Thats good news for all.
i guess.
Cheers.