If This Were A Guitwar, But Then Again, No.....Three New Ones! 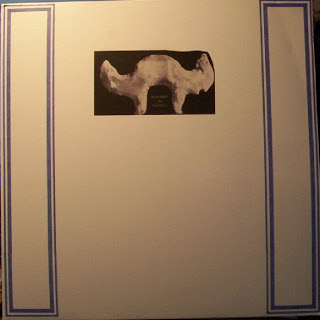 I know this New Rock Syndicate lp's been around a while but that Rouber's lp got me all hot to check out more Japanese styling's so here I am. Excuse me for not bein no Matthew Perry, but I ain't been keepin up w/names, bands 'n side projects of all these players. I think the guitarist here, Kawakguchi Masami is/was in LSD March (at least) & the other fellers…so sorry, but I have no clue. Outta the gate this thing rings heavy w/Rallizes bells; that slow buildup that eventually explodes into a guitar solo meltdown, then comes back to expire. Okay! The next couple've tracks just seem like eastern blues workouts, nothin real pro or con to speak of. Like the Shinki Chen lp in a way w/less Duane Allman & more Alvin Lee bobble heads nodding in time. It's the b-side what really had me goin though. It's arguable if any other country has sallied forth as many string benders what's latent Hendrix acolytes as much as Japan & hey, that's a good thing. But hows most of'em have seen fit to bury this …..influence…..is whats tellin. There's a few real intense moments on 'Echo' where I was thinkin Masami was gonna really lay it down, but after a few growls & feedback grunts, well…..I guess what I'm sayin is the Hendrix vibe is there, it's just been displaced. It's like these guys decided to channel Jimi & Co. by way of a brace've mysterious Trower & Mahogany Rush bootlegs & that distillation is 'Cat Vs. Frog'. And I gotta couple've bro's that'll dig this just fine. Me? I reckon I need a few more thumbs runnin the fret. Available via; www.dorkinglabs.com/palindrone


Men who ain't afraid to be seen in public sportin midriff's might beg to differ, but I'm gonna give it to the French as the true purveyors of Prog Rock. Say what you will about Canterbury, Krautrock, blah, blah blah, at the end of the day you'll be tipplin Calvados & sweatin aspic like you was a Spam loaf come to life. The Gallic power of persuasion. And they's invented Musique Concrete too & ain't no flatass hiphugger's anywhere disputin that posit. Cause it ain't conjecture. It's truth. They did not however invent Punk, though it is their penchant to reinvent-theoretically-& lately they's been at the forefront of some Chrome damaged, post No Wave, syntho oriented destructo-blat that's as good as anything goin. So when a couple of them from there called Accident Du Travail decided to collaborate for a project of Ondes Martenot recordings (LOOK IT UP!-Capt'n Siltbreeze), I was expectin shards of wood & pearly keys bein strewn from here to Timbuktu. But paint my face 'n call me Marcel Marceau if this ain't a lovely & beautifully paced ep. Comprised of 24 minutes've lusterous hamonics as well as some tweaked melodies, this really taps into the cranium like a perfect bridge between Boulez & Lard Free. Great modal progressions too, hey, if this was as '75 as it sounds, you can bet your Birkenstocks it would've been on that NWW list. And if you didn't know it was members of Cheveu & Cradle Of Smurf whats behind this, well, you wouldn't know it. On a cold day like we got here, these sounds really warm up the room. Bruit Direct delivers another winner, hat's off to'em.
www.bruit-direct.org

Not that you's was payin attention, but to get back to what I was sayin yesterday about the new Aussie scene, it's brimmin w/vitality & variation. So it seemed apropos to deliver the dirt on The Deadnotes, which is a trio what hail from Brisbane. They's got an lp entitled 'Orange Trumpet' that's come out on the Soft Abuse label what's a pickle & a half. 30 track's of playful, armchair whatsis, why I'd have tagged'em for a Melbourne band if I'd hadn't been clued in! Via trumpet, guitar, drums & occasional casio, these guys slice the staccato like ripe mangoes destined for a rum filled blender. Perhaps a sloppy nod to Laughing Clowns, a wink to Essendon Airport, maybe even an intuitive nudge to the drollery of Trevor Wishart & Steve Beresford as well. Anyway you's shake it, theys got plenty've pepper for the pot. Edition of 400, go to; www.softabuse.com
Posted by Siltblog at 10:44 AM