Sketches Of Spleen.....2 New LP's On The Milvia Son Label. 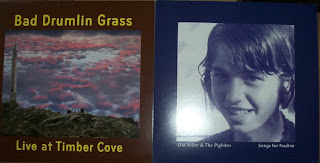 I would've sworn I reviewed the 1st Bad Drumlin Grass lp, An Invigorating Scent Of… a yr or so back but I'll be damned if I can find any proof to that. And now I can't find the dang lp nowheres but I gotta say, I liked it fine. The Grass is 2 fellers what play a mix of Takoma shimmer crossed w/an assortment've Woodstock rural rock so they ain't neither one (Fahey/Basho worship) nor the other (Dylan/Band/Happy Traum apologists)). That would be my broad stroke've what's doin on that debut. Hailin from the land of the vegan tweaker & useless PHD (Berkeley, Ca to the rest of us), BDG seems to be something of an anomaly in the bay area scene. Or so I reckon, hell I don't know everyone out there, but those I did ask didn't know who the fuck I was goin on about. I's told they are separated by a certain number've degrees from the Sublime Frequencies bunch too. Somethin about either buyin (or sellin) one're the other hash or a wife, or maybe it was bustin out one're the other from some ding dong Pacific island shitshack torture cell for said infraction(s). Alls I know is they gotta story & it sounds like a good one. But like a lot of things that pass through the portals of this blog, I'd all but forgotten'em. Then a box arrived not so long ago & it was new swag from the Grass & their flagship, Milvia Son Records. And shitfire & damnation if they ain't plied w/the gifts that keep on givin. And if you don't know what that is, pony up.
There's 2 lp's what come, them & a 7" that I's done misplaced (sorry fellers). The 1st one is another vinyl installment in the Bad Drumlin Sound saga entitled 'Live At Timber Cove' & it's a pretty big departure from that 'Invigorating Scent' lp. Side a is mastered at 45 & the ambient soar of the sidelong track ('The Expanding Universe') is as crisp as a duckskin wonton. The Drumlin's boys is well informed & have composed a deep & beautiful piece that channels the apex Canterbury prog moves of Quiet Sun , Fripp/Eno, as well as some Cluster love thrown in for good measure. The flip contines on in a similar vein though the narrative becomes more fraught 'n menacin, sort've like Far Out witchily coverin 'Set The Controls To The Heart Of The Sun'. And I grant you, that ain't nearly as gothed out as Psychic TV retellin the same tune, but dear reader, what would you have me say? I am simple man, born of a solitary gender & it has caused me no confusion whatsoever. I think the 1st book of Porridge would approve've the timbre & tension Bad Drumlin Grass convey on this track & let's face it, when the lights are out, we's all the same anyway. Or ….? 300 pressed, your gonna have to tune in to find out.
The other little engine that did was an lp from what I presumed to be outfit called Old Yeller & The Pigbites' but in truth is a lone plucker/singer by the name've Bob Frankford. And like the, uh, great visonary he must be, Bob seen his quest in true Blakeian enlightenment. Sez Bob "I wanted to sing & play like Dylan & I wanted to be all the original members of the Dead". And like the best taskmasters of the unhinged, what Bob attempted & what was achieved is 2 gloriously different things. Entitled 'Songs For Nadine', to my ears this dog runs right up there w/'Attic Demonstration', Prominent Disturbance, Peter J Cox's 'Running Away With Yourself', Parameter, any of the best artists inhabitin the Acid Archives. And true, it could all be a ruse, this bein the time of artifice & counterfeit weirdness (kudos to Boots/C.C./Snake & Remus). But I ain't Trevor Roper & this ain't the Hitler Diaries, so I ain't got no reputaton to stake. Alls I know is that the bread baked by Old Yeller & The Pigbites is warm & welcomin. Long may it rise. This is a small edition , 300 or so, might as well hit'em up direct at; www.milviason.com
& be sure to order the 7" comp while yr at it. It's gotta be tippy too (now where the hell did I put that thing?).
Posted by Siltblog at 9:55 AM