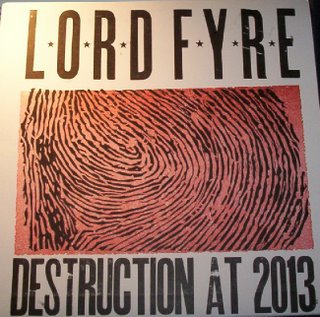 I got this friend named Vance Hitler who claims he's related to you-know-who. An uncle or somethin. I know, it's preposterous! Claims he growed up on Long Island where folks either hated or feared him 'cause of his surname. Says his line of the family had always kept a considerable distance from their despotic kin even as far back as the 1930's. So all's they got in common is the name. That's alot if ya ask me! But Vance is a funny guy & just about as opposite from his evil forebearer as a fella could be. He loves meat ('cept sausages), hate's marzipan, don't paint, not a dog fan, despises clowns, never done coke & likes his drink (not whiskey though. "makes me mean" he always says w/a smile). And comin up wherever in Long Island, he was surrounded by cults, paranormal mediums & ufo nuts of all sorts. Which might go a long way to explain why he runs this bookstore what's devoted to Flat Earth theories, conspiracies of all sort's, science fiction, the whole bit (the one exception bein anything on the Spear Of Destiny for, uh, obvious reasons). It's a neat place & there's always some curious smellin incense permeatin the room as well as atmospheric music waftin outta the speakers.Once when I was in to pickup this book on Mayan submarines the nose-ringed girl what sometimes filled in was playin this spacey instrumental buzz & I asked who it was. "Lord Frye" was the response, "like the boot". I don't know why, but right then I weren't no longer interested. I never did like them boots, they took forever to break in & yr feet hurt like hell all the way through. So I got what I came for & split. Then yesterday I was in to see if Vance had a recipe for Kykeon & he was playin something that sounded an awful lot like the boot stuff. 'Cept this time there was singin. It had a vibe that I couldn't quite pinpoint. It was sorta like Gothic Hut if they'd gone psychedelic or maybe even Culturcide if they's stayed the course instead of cashin in for laughs. Vance just rolled his eyes at all them notions. 'Mein Gott, it's this band Lord Fyre" & handed me the lp jacket. That changes everything! I had a gander at the inner sleeve to see what was what. Lots of names & instrument info that I didn't have time for so I went & got a copy for myself. Listenin to it again this mornin it's all right nice & suitably avant oddball w/hint's of stoner. They got this thing for Sun Ra & you can tell someone in the ensemble is very big on 'Strange Strings' &/or 'Atlantis'. Their overall psychic design seemed reminiscent of early Tower Recordings, as though a copy of 'Fraternity Of Moonwalkers' was somewhere within arm's reach (the cute aka's they give themselves was a dead giveaway too). And while I'm at it, there was moments on here where if I didn't know better I've swore I was listenin to parts off've Dashiell Hedeyat's 'Obsolete' album. And that sure don't happen much. I ain't criticizin'em for any of it, hey, them's good places to check in & see the sparks fly. I was very taken w/'Destruction At 2013'. And once I Sherlocked that insert but good I spied a name from the past that almost brought a tear to my eye. It's comfortin to know that some old coots can keep on rollin. I can't say how "real" Lord Fyre is, meanin, I know that some of'em got's other musical concerns (that I ain't all that interested in) that might take more of a front seat in the overall scheme of things. I understand. But this Lord Fyre stuff, I'd definitely be up for hearin some more. And to think I woulda passed'em by if it weren't for Vance Hitler. Thanks Vance! I tell ya, that guy....they don't come much better.