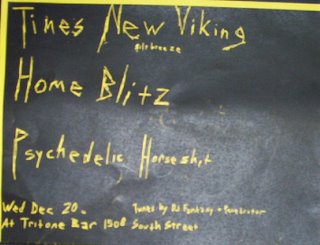 Times New Viking & Psychedelic Horseshit got the bright idea to do a small tour of the near South & East Coast the week right before Christmas. And it has been about as hostile & inhospitable of a folly than it deserves. And so w/a couple of cancelled gigs, the little army of six decided to bivouac at my place for the past few days. Nice people's one & all. You can always learn from your houseguests, especially if they's in band's. For instance, up until today, I never knew what the inside of a cigarette filter smells like or that an entire floor of a building could replicate said aroma but that's what I got goin on now. You'd have thought they was all smokin clones devised by Phillip Morris in a 'Boys From Brazil' sorta way. They huff 'n puff them butt's like they was a life force.It's an eye burnin, sneeze inducin fog that won't lift. I was thinkin about leavin some bleach out to kill the stench but I'm afraid one of'em would drink it (they'll do just about anything to catch a buzz, especially the one called Jor-el, or Jarrod). They's went down to Baltimore yesterday for a skirmish at Talking Head & come back about 4am all the more worse for the wear. There's gear missin, eye-glasses what's been lost, toes broken & on top of all that, they didn't even get paid! I tell ya, listenin to the tales of woe & seein them all in various states of fatigue, anger & bewilderment, they's like a ragtag band of Confederate ruffians tryin to scavenge the landscape in the early days of April, 1865. And every time I open the door to the downstairs parlor-what w/the odor've forced heat blowin stale smoke,ripe socks, etc.-& see their bloated bodies wheezin & coughin as they sleep, it's about a close to a Matthew Brady repro of Antietam as I want in the here & now. But while's they might be bloodied, they remain unbowed & the last 2 shows will no doubt prove to be the dingers of this, uh, "campaign". Grey thumbs or not. So fans, enlist now! Here's where;

And don't forget to ask for (& buy) the new tour only split 7" ep, limited to idon'tknowhowmany copies. They can't eat'em. Maybe you can.
Posted by Siltblog at 7:31 AM