The Trouble Ain't That There Is Too Many Fools, But That The Lightning Ain't Distributed Right....JOMF's 'Candyland' LP 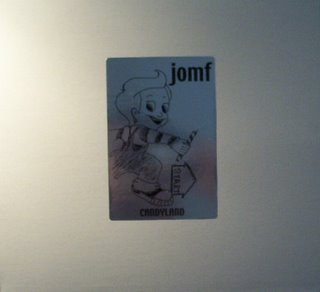 Yo, I'm as bummed as you that nobody asked me for my contribution to that Overrated book. I wouldn't have had to think too hard on it either! Actually, that's not entirely true. I had willfully forgotten about my entry until someone sent me a link to a vid of a live performance by JOMF from last year that was bustin at the seams, chock full've pretentious, "organic" & spontaneous (ugh) FREE ass-squirt that's almost pathetic enough to make you wanna go & get a law degree just to sue somebody for that time back. Imagine holdin a grudge that long? Hey, you watch the thing & tell me I ain't gotta case! But you know, it didn't stop me from buyin this latest by Jackie-O-Motherfucker 'cause I didn't wanna miss anything. And guess what? I didn't! Isn't there some old sayin about a fool & his money? That'd be me. Hell, I had a bunch've their other stuff through the yrs & have always been flummoxed as to why anyone'd give two shit's about this tired brand of gelded, atmospheric whatchamacallit. Then again, I'm not a toque wearer. In the world of New Weird America harness racing, JOMF are a loose reined trotter, plodding & definitely prone to shift out into the lane of other horsey's. On this one, they spin around the track, tryin hard to compete w/brethren Wooden Wand, Matt Valentine & even Charalambides, but the driver's tipped outta his sulky & they've tailed off, another goner,yet again. Why I keep comin back is one of life's lesser mysteries. Maybe I've just a masochist for bein underwhelmed. If that's the case, then JOMF have never let me down. If your a discerning listener w/15-20$ burnin a hole in your pocket then I am here to tell you that this pony's a bust. If however, you are a connoisseur & collector of all things New, Weird & American, then how could this platter of yawn-gum NOT possess the flavor's of an essential chew? Essentially speaking (of course). By all means, chaw away! Be careful to mind the bit's of corn though. They've been elsewhere.
Posted by Siltblog at 12:45 PM

I hear your pain. Got the 2CD Wow!/Magick Fire Music set and was massively disappointed.

Hi, i was looking over your blog and didn't
quite find what I was looking for. I'm looking for
different ways to earn money... I did find this though...
a place where you can make some nice extra cash secret shopping. Just go to the site below
and put in your zip to see what's available in your area.
I made over $900 last month having fun!
make extra money