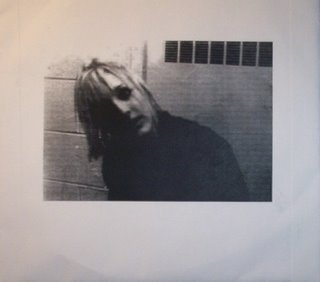 At 1st glance I thought this was a 7" by Pink Section! Remember them? I can't says that I was excited by the prospects of a new Pink Section record, mostly because the one skinny tie I owned I'd lent to a neighbor back home who'd used it to asphyxiate himself in the shower while playin that lp by Tangier. I never did find out if it was some of that kinky auto-erotica shit or just good ol' depression come knockin & if you ever heard the Tangier album, you know what a hard call that'd be to make! It could go either way.
But I gave it a second look & seen it was a band called Pink Reason & they weren't from nowhere's near SF, hailin instead outta Green Bay, WI. They seem to have a pretty good take on the woeful ennui that make Saxon hearts (& veins) flutter & I wouldn't be suprised to meet this band & find'em wrapped in scarves that had once been owned by JG & Ch 39 or other, lesser known phlegmatic Deutsch masters that worship at the Reed, Chilton, Richards alter. From a more jovial, Quixotic perspective (mine or theirs, no matter) this could also pass for liquid take, pre Ohio Demo's from the Cramps; the wet, nascent beat of gravel 'n blues has a loose & rickety DIY presence that would make any right-headed Anglo murk-shuffler light up like a radial bonfire. The best record of it's ilk to ooze outta Wisconsin since Hollywood Autopsy slithered into exile. 300 pressed. Get it here; http://www.s-srecords.com/
Contact the band at; Savage Quality Recordings, 1132 S. Quincy St., Green Bay, WI 54301
Posted by Siltblog at 6:53 AM