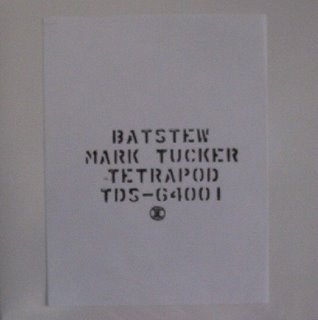 This is one of those lp's that I've heard about for years. People'd say to me "Roland, it's right up your alley" or "Roland it's terrible. You'd love it!" but when I'd ask'em to describe it they'd go doe-eyed & get all pickle faced 'n say "you just have to hear it for yourself." Well finally, thanks to the De Stijl label, I have. And let me tell you something; I am perplexed about what I heard. Mostly, I guess, 'cause I ain't hearin things what other scribes have insinuated I should. Department Store Santas? Desperate Bicycles? Not in my kung fu village! To me this lp teeters on a precipice between euphoria & anguish. It is certainly the work of an unstable mind & tortured soul. I mean, you can almost feel Tucker's circuits shorting out as the record progresses. You don't need to read the insert to hear that! There's alot of sadness & confusion goin on too. It's a record about a guy's love for his car. It's a record about guy's love for his girl. There's a song that's evidently an ode to homosexual love (not that there's anything wrong w/that). The guy records himself talkin to his car, slammin the doors, the girl whispers & sings along sometimes. Yeah, it has it's moments; like the naif, art brut-ish noisescapes that Tucker occasionally creates or like the dingaling song at the end of side 2 that's about a Cadillac (among other things) that eventually crumbles into a fuzzy guitar "freakout". It is one odd fucker of an lp, there's no denyin that. But how someone-& I won't say who-winds up comparin it to the albums by Department Store Santas & Desperate Bicycles is beyond me. Oh sure, those're nice lures your tossin out there, but they're inappropriate. Those bands lp's are challenging. Tucker's is more challenged. Maybe what they meant to say was that one day Mark Tucker saw someone dressed as a department store Santa, went banana's, then desperately rode a bicycle to the mental institution. I dunno. I wasn't there. If I was to sell you this record I would say "imagine a record that sounds like someone who claims to be Daniel Johnston who rerecorded Smile" or "imagine if Larry Fischer had been commissioned to do the Pink Moon lp as literally a Volkswagen commercial". Would you buy it? I know I would because that sounds like something that's right up my alley & the descriptions are terrible enough that I'd probably love it.
That said, Batstew is certainly a unique album. I dunno about a masterpiece, but shorter people are prone to exaggeration. And that's a fact! I'm glad I got the hear it & props to De Stijl for reissuing it. You can find it at; www.fusetronsound.com
Posted by Siltblog at 8:07 AM

Hi, I was surfing the internet and here I am at your blog. I'm quite impressed , with how you have put it all together.

I'll be coming back again.

Hey Tom. You know, Tucker's second album In the Sack is better than this one - more musically developed and maybe a bit more appropriate if someone wanted to put it in the same bag with Department Store Santas or something.