Bring Me The Head Of Ritchie Venus....Jerusalem And The Starbaskets split lp 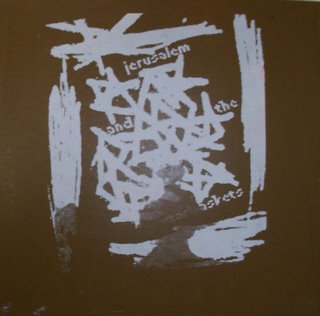 In the latter part've the 90's there was no escapin the Elephant 6 Collective. Scribe's 'n scribblers alike could not contain their hyperbole when describin whatever band was in vogue from said confederation. The word "genius" was tossed around like a cat turd outta Brian Wilson's sandbox, especially whenever de facto leader Jeff Magnum's name was brought up. I dunno, I never bought into it. I saw one of them bands-forget the name now-in 2000 or so 'cause The Clean was openin up & let me tell ya, they was the best part've that show. Couple yrs later I'm in some bar & a band commence's to play & they've got this cool bailing wire 'n bubble gum pop thing goin, a veritable Christchurch rumble if you will. It was pretty great. Turns out it's Jeff Magnum on drums & some other folks. We talked for a minute & he said that yeah, the old NZ pop sound (read; South Island) was a big inspiration & while I can't say I ever heard it on anything else he's done, it was as right as rain that night.
So cut to 2006 & this split lp by Jerusalem & The Starbaskets (b/w Skarekrauradio), a band who have seemingly looked to the constellations of the southern hemisphere & used bins around Columbia, Mo in search of similar inspiration & motivation. Their side of this lp is the finest appropriation of the ChCh sound since.....since the last good one! One thing you gotta understand when you attempt to chugalug is that the Velvet Underground is the life blood w/'Loaded' at the heart of it all. The other is that the 13th Floor Elevators (notably the 1st lp) function as the medulla oblongata. Between the two of'em, they gave the city "that sound". Believe me it's there, from Bill Direen to Pin Group, 25 Cents, Max Block, Scorched Earth Policy, The Puddle, Terminals & even the non Flying Nun bands like Riptoids, Les Bottletops & Brother Love. And while Jerusalem & The Starbaskets're closer to the Mason Dixon line than the international date one, soundwise they might as well have a return address somewhere on the Canterbury Plains. And their cover of Roky's 'Unforced Peace' would make even a seasoned sodbuster like Dwayne Zarakov rethink his retirement clause.
The Skarekrauradio side on the other hand is thick w/it's detuned homage to DIY Americana fringe-psych & alt. (lifestyle) punk, most notably Meatjoy. Don't know who that is? Imagine a female fronted & feminist motivated Wingtip Sloat. Hey, don't blame me, your the one that asked. Actually, I always kinda liked that Meatjoy album. I haven't played it in about 10 years & since I feel like I just heard it, I got no compulsion to go & look for it for at least another five. So if I could say anything positive about Skarekrauradio it's "thank's for that !"
But anyway, that Jerusalem & The Starbaskets side.....it's worth price of admission. This is a ltd ed. lp of 200. You can try www.aquariusrecords.org or go direct to http://www.apoprecords.com/