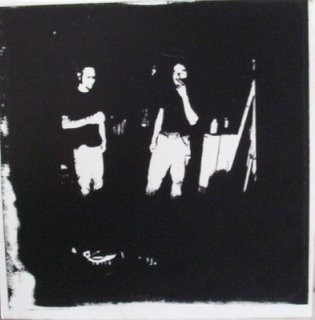 The Supersonic Sounds Of Missoula Montana.....has a ring to it, doncha think? Ummmm, unless we're talkin about a promise ring, I'd have to say "no". Then again, I am unfamiliar w/the Garden City scene. It might be full've New Weird America bedwetters & Noise undertakers. And doesn't every college town nowadays have at least two crunchy dirt/grindcore/thrash/metal bands to contend with? Oh the days of the flat keg & basement mosh pit! And you'd think that Drag City'd have a scout plopped up high in a catbird seat somewhere in town. So how he (or she) has missed Ex-Cocaine is one of life's fleeting mysteries. But takin the scout's honor, maybe the band just didn't want to be found.
Ex-Cocaine is the practically unheralded duo of Mike C & Ramirez on drums & guitars respectively. Their sole lp, 'Keep America Mellow' has been released in 2 editions of 100 on Ramirez's Killertree label. With those kind've numbers, it's hard to build a radar to fly under, so you might wanna flag down a checkbook & grab a copy while you can. I'm afraid it's awesome.Working pretty much from a template of congas & electric fuzz, these heavy mellow bro's conjure up swirling eddy's of lo-fi, DIY psych that are pretty unbeatable. Were we to have a séance-or simply break out a Ouija Board-to investigate previous blazers of their trail, we might see, hear or spell out such luminaries as Steve Peregrine Took, Stone Harbour, Parameter, Tim Buckley or (Jandek's) Units. During the cover of Roy Harper's 'Another Day', I swear I could almost make out the misty visage of Lou & Eric from the 1st Sebadoh lp & you know...it wasn't a bad thing. Such is the force of positive vibes that surge through the veins of this album.
So check'em out via the Killertree website. And while your at it, invest in the Universal Indians lp that's just been released. If you ever wondered what the American cross between Highrise & Dead C sounded like, drop the needle on 'Monster Approach' & put your brain at ease. Go in peace to; http://www.killertree.com/
Posted by Siltblog at 9:26 AM