The Past Is Never Dead, It Is Not Even Past...Birchville Cat Motel's 'Glass Harvest Mason' 7" 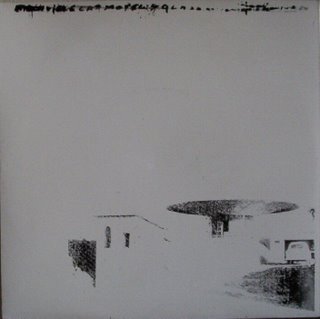 I could be imaginin things, but I thought there was a time when Birchville Cat Motel was a band. You know, with band members, people who played instruments like guitars 'n drums & made music that was rock oriented. But not so long ago I went to a concert they was playin & alls it was was this ample little fella w/a beard pushin buttons on some sort've a machine outta which emanated lots of harsh noises. He may have had sparklers goin too, or candles or somethin. I remember a bright orange light, a glow if you will. Mr. Birchville Cat (aka Campbell Kneale) might've even been wearin some kinda hat. And maybe even a cape. I felt like I was at a little kids magic party, 'cept all the kids were over 21. But they sat there cross-legged on that filthy floor & watched him, like at any minute he was gonna pull out some balloons & start makin animals. Didn't seem like much to me, so I went back to the bar & just listened. 'Course it wasn't what I'd paid to hear, but it was okay. And the more Rolling Rocks I knocked back, the less I thought about it. Not a bad night all in all.
So the other day I was fishin around a box of 7" records & I came across this one. It was a starkly attractive package w/a fabricated handmade sleeve, done in a small batch 370 copies so I figured what the hell? Five dollars didn't seem like a lot for a trip down memory lane. But what I heard took me a lot farther back than some shitty club & a fat wizard w/a noise box. The 1st track sounded almost exactly like the time me & my cousin Harmon (who everybody called 'Pooter') was draggin this ancient tractor across a cow pasture. We was pulling the livin hell outta that thing & it groaned 'n rattled 'n wheezed & we thought it was just gonna fall apart right there. We'd got it almost to the barn when I reckon we humped the thing over a nest've mud daubers & then they came at us all nasty & buzzin & we got to runnin so's not to get stung. They got Pooter pretty good, but I jumped in a creek & cut the shit outta my right leg on the edge of a rock just below the knee. As I sat there all bleedin, listenin to the whoosh of the water across the rocks & feelin the extreme pain that was shootin through my brain I thought to myself that is the last time I let that lardass sonofabitch talk me into something so stupid. Pooter ended up dyin from them stings so I never did find out why we was draggin that damn tractor around in the 1st place. The dumb shit.
The other side of this record took me back to a time when me 'n The Stepp Brothers whose names were Darry & Esto (I ain't makin this up!) went down to Lafferty's Pond to race some motor boats we'd carved outta corn cobs. We'd rigged up these little battery operated outboard motors for'em & was lookin to have some fun. Now, we had to go there around dusk as to not draw attention. Them little boats hummed around on the water, the frogs & crickets were croakin & chirpin & it was feelin like a good time. Then Darry Stepp picked up a mud clod & whipped it at his brother, hittin him in the eye w/such force I thought he blinded him. Esto howled w/pain & then he charged Darry & the both of'em went into the pond wrestlin & fightin & screamin at each other. I grabbed my corn boat & hightailed it up to the Lafferty's house to tell'em what was going on. Nobody was home so I ran out to the road to flag down a car. Ol' Sam Jefferies stopped & I told him what was happenin & he said he'd get right home & call the fire department. By the time they got down to the pond both brothers was dead. They'd drowned each other. Their little boats was unharmed though & had moored themselves over near a bunch've cat tail weeds. The frogs 'n crickets had long since shut up & now it was just sirens & walkie-talkie's that was makin any noise. I took them boats w/me & put'em in a box in my closet. Eventually my mom threw'em away but by then they weren't worth nothin. Bugs had eatin through'em & the batteries had rusted. The end.
So what I'm sayin is I got Campbell Kneale to thank for dredgin up all those horrible fuckin memories. I guess I could've just written "this record sounds like a lawn mower on the moon" but then you'd have never got to read about my life & besides a lawn mower on the moon sounds awful futuristic to me. And while I can't say what the future holds in store for this record, I'd bet it's not long for this world. Contact; www.vegliarecords.com
Posted by Siltblog at 8:27 AM