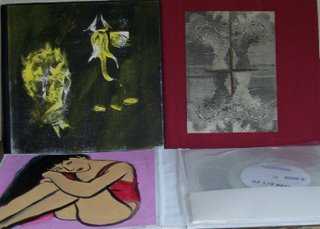 When Peter King opened his lathe cut pressin plant in Geraldine, NZ (sometime mid 90''s) it was akin to an underground GOLD RUSH as had ever been experienced. Suddenly a bonanza of ltd. ed. pressings were known (or rumored) on the landscape, both in mini or micro editions & of course, a collector's frenzy followed. The music come in all manner of styles & I heard there was a couple gent's what have come to own pretty near every one what's ever been released. I wonder if ol' Pete was privy to hearin every gem what rolled off his press. If so, I'd imagine them ears damaged beyond repair or at least not bein able to tell the difference between the ding of a dime or a dollar anymore. And if he held on to one copy of each pressing, he's got a superior mother lode, one to rival the bounty of Dinty Moore & Darth Vallor COMBINED.Nowadays there's other cutter's of lathe what's got into the game & I believe they reside here in the US, but there's some that still swear by the founder of the fad & is willing to postally circumnavigate the globe to have the Geraldine mark of excellence stamped upon their offerings & one of those loyal is Clark Griffin at Moran Tape Label.
My first encounter w/them was in late 2005. I recieved a box've goods ostensibly as a press packet for the Sea Donkeys who was lookin for a show here. It come from some place in New York called MTL which I was unfamilar with. Upon openin I come to behold a few beautifully crafted cassette boxsets & a handscreened lp jacket that housed a 12" lathe cut. Naturally I went for the "vinyl" straight away & what jumped outta them speakers was exhilaratin. The thing opened w/ a raw,reed shreddin blast of saxaphone that conjured up the spirit of every free/fire blower from Ayler to Abe to Flaherty. And as them lathe's have notoriously thin cut grooves, the crudophonic quality gave it a tar-caked feral sheen. What's more, layered on top of the horn was a series of clunky cut/splice tape shenanigans that was adorably inept yet staggeringly apropos. The name of the band/record was Pigeons II & it didn't take long to realize they was takin a (duck) stab at the aorta of Neu Weird Counterfeiters while also stressin a bridge between Rova & Smegma that had yet to be spanned. The cassettes was even more ample in their zonked goodness & while I didn't know what any of it had to do w/Sea Donkeys, I really didn't give a shit either. Course I come to find out the two Pigeons-Wednesday & Clark-was part of the SD cast & blahblahblah, but that's talk enough about birds 'n asses. Let's jaw for a while about this new set've lathe's that MTL has on the table. You might find your interest's piqued.
Basically what's doin is Clark has gone & run off a set of seven 8" lathe's & housed'em all in superior, one-of-a-kind handmade jackets. They's like books for your ears or something. They's also like custom made shrines or sound sculptures. Hand bound, stitched, woven, painted, decorated, poached, fried & scrambled,I dunno how to appropriately convey the uniqueness of'em w/o soundin simp. And the music's just as indescribably covetable too. Once you get your hands on some copies you'll know what I mean. In the series is; Sea Donkeys, Enos Slaughter, Zashiki-Warashi, The Gentiles, Katerina Tunicata, Pigeons & Little Howlin Wolf. As I am privy to all titles, it's hard to imagine how any one would hold up w/o the others in tow: the ambience, assemblage, creaks, croaks, strains 'n strums while independent is also united. Imagine if them Blorp Essette or Recommended Records sampler LP's had been individual records to have, hold & hear. That's basically what's you got workin w/this set've beauties. If any one was to stand out from the rest I reckon it'd be Sea Donkey's whose contribution to the cause sounds like Elephant's Memory stuck backstage at a Tull concert (circa '73) not by mistake but on a DARE. Hey, I'd be fired up too!
So yeah, I guess if you's is the type to count them releases on Ralph, LAFMS, Recommended or M-Squared as the cream of your crop, an investment in the goings on at Moran Tape Label is a MUST. Listen, laugh, learn...oh what a joyous series this is to behold! And when you ain't got'em on the turntable they'll brighten up a bookshelf or display counter like a roomful've daisies. Just lookin at'em will put a smile on yr face. And the merest thought of balancin'em on your head makes posture perfect. Is there anything they can't do? Find out for yourself, go to http://www.morantapelabel.com/ & see what's available. There's only 40 of each & the clock is tickin.

Yeah, well, try ordering one of these. You'll find the clock keeps ticking because they don't turn up. It's over two months and counting for this wised-up consumer.