Revenge Of The Alophen Baby.....Little Claw's 'Moss Has Fangs' LP 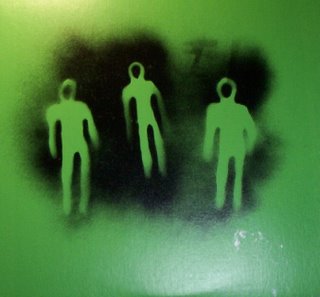 I'd never claim to be the sharpest arrow in the quiver, which is my way of sayin it's taken me this long (arms spread WIDE) to get on board w/Ypsilanti Records. I recently recieved a small parcel of recordings from the label & they's all tip top. Who'd have figured! I mean no offense, but that's a pretty silly name for a town, let alone takin it on for somethin else. I been there before, it ain't a bad place-the all night chili dog stand was key- but I'd always figured it was a destination where old golfers who'd lost their edge on the putting green went to cry & retire. But silly me, it ain't called YIPsilanti (whuuuuuu?), it's IPsilanti (the y is pronounced as an i), which is a whole 'nother horse of a different shade. Now that the history/phonics lesson is over, let me tell you's the standouts I recieved was a 12" from Genders (great dub meets Cab Voltaire), a Odd Clouds album (terrific post Poobah's/Pasedena art-noise whoosh) & the latest title offered up, this mini lp from a band called Little Claw.
Now like I said, this is new to me, so if this here record is a year or so old, so be it. I ain't never heard nor seen it before & I reckon there many among you's what can make a similar claim. Since all the releases seem to come w/handmade covers, labels, inserts & pretty colored vinyls, I'd bet the runs on any of'em ain't more than a few hundred. The distro on it is exclusive to Carrot Top (for all you stores out there) but the fella what's the mastermind, one Fred Thomas, can be contacted direct but let's not put the cart before the horse just yet. This Little Claw record needs a spot of props 1st.
Since they's on tour & w/a couple of other records to be released imminently, I figured I'd single them out for some solid bunk. They's got an awesome sonic caul that immediately recalls a simmering crockpot've wafting aroma's as diverse as Raincoats, Royal Trux, maybe a hint of 13/13, def. a touch of X/Pressway damage, you know, all the right ingredients. But what overpowered my sense's more than any of them was a similarity to an updated, more menacing take on Sheer Smegma (aka Teddy & The Frat Girls), minus the yuks but every ounce the vitriol & unapologetic swagger. Occasionally atonal, often meandering, jaggedly rocking, Little Claw's got a great gust've gristle throbbing blabber 'n smoke behind'em. A summer tour w/them, Los Llamarada & Pink Reason would not be the worst thing that could happen to this planet. Calling all curators! Who you gotta blow to make this dream a responsibility? Ho-ho, I'm so sure, but then, you never know. In the meantime, don't wait for nothin, check out this Little Claw lp 'cause it is one goose that is really cooked.

Check'em out live in SF tonight, 8pm at the Hemlock & later at the Peacock Lounge (w/Sic Alps)!
Posted by Siltblog at 9:34 AM

Thanks for covering this Little Claw. They're probably my own favorite band that I discovered this year, beginning with the tracks from their upcoming second LP, on a label that I believe is still to be determined (hint, maybe!). Your description of the first album still fits the forthcoming, but the onslaught is improved by double the confidence.

I've heard one nonplussed reaction from a trusted source who heard songs from the collaboration 7" with Michael Yonkers, but I've not heard it myself. It's supposedly right on the cusp of coming out.

As a live band, Little Claw were pretty tremendous in Davis, CA, at a brief, mid-evening house-show. They sent everyone off to the ultra-kegger that followed, and I believe that the energy that they sparked kept that party buzzing past 5:00 a.m., and at least a few Davis people were angling to make out with members of Little Claw.

Guitarist Kilynn is Little Claw's most singular voice, and not only because she is the only one doing singing duty on these first two albums. Her guitarwork and stage presents exudes femininity and fierceness in a very convincing manner. She's confidently switching the knob from all delicate yin to all ferocious yang and through all gradations in between, but never comes off as contrived.

She is also in a trio called Black Egg with one member each from Sunburned Hand and (yep!) Jackie-O Motherfucker (and to answer your question about ex-JOMF'ers, this guy Nick Bindeman, the solo artist known as Tunnels and ex-member of a lot of bands ranging from really good to downright awesome, is my pick as THEE ONE to watch. The Black Egg CDR I've heard is the ultimate digital-delayed float-on-a-cloud-of-bliss psych/folk jamrock I've heard since the first Inca Ore album came out as a handmade CDR. It resets the curve in the moan-wave class until Oaxacan makes a record finally, and it singlehandedly causes another couple of quintiles of the class to flunk out completely. I hope it finds its way to you.

little claw is easily one of the worst live bands i've ever seen. of course, that's a personal opinion. but they have an absolutely terrible drummer who obviously doesnt know what he's doing, and looks uncomfortable in the process. they have potential, and the vocals are solid, but they seriously need to drop the child behind the set.