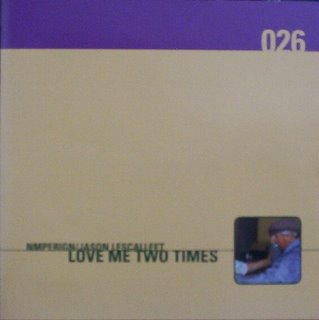 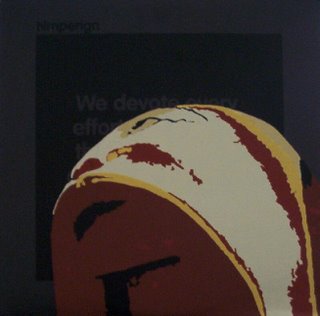 The summer after I was done w/high school I lit out for Bennington College to hang w/some buds who'd enrolled there for continuin education. They'd rented a nice rancher in South Shaftsbury, complete w/a outdoor grill, a yard big enough for some serious croquet & best've all, an in-ground, cement swimming pool. Man was that water cold! But refreshin too. It was a helluva time & we was all-surprisingly-well behaved (for the most part). There was a bamboo bar set up in the den in front of a sealed up chimney complete w/a working fridge & a beer meister that served cold Rolling Rock 24-7. When everything was goin great guns-which was often-you couldn't hear nothin over the din of free jazz records & enthusiastic repartee that hung in the room almost as thick as the smoke. When things was quiet, the room still hummed & buzzed, as though it was it's own living organism. Not that loudly, sometimes you almost had to strain to hear anything. But at other times it was almost static. I figured it was the generators, motors & pumps're whatever from the fridge & keg contraption & payed it little mind. We all did. But then one day as I was cleanin up after an evening of extreme Miles Davis I began to listen more intently. It wasn't them machines after all. It was comin from inside the chimney! I called the landlord who sent over an exterminator that did a whole insect witch doctor thing-knockin on the walls, listenin w/a stethoscope, up 'n down on his knees lookin for hell if I knew-that after a spell told me we was infested w/hornets. Or wasps, he wasn't 100%. He figured they'd probably been burrowin inside there for yrs, comin in from the top (what was still accessible) & for all he knew, there was maybe hundreds of colonies thrivin inside there, meanin there was THOUSANDS of those predatory fuckers alive just beyond the lathe & plaster. He told me to put my hand over a spot & when I did, I could feel a pulsing & hear this high pitched, anxious noise building just beyond. It was manic, like at any moment they'd come exploding through & let me tell you, swollen w/venom (or flat out DEAD) ain't no way to go through life. "It could happen" the exterminator said, "the plaster is already thin, it's just a matter of time." That's all I needed to hear. I was in my Camaro & headed south on Rt. 7 faster than you can say Marlin Perkins.
Just the other day while listenin to this double lp by Nmperign entitled 'We Devote Every Effort To Offer You The Best That You Deserve To Have For Your Enjoyment' (whew!) on the Siwa label, I was reminded of that chimney & them bugs as well as somethin I read by Cornelius Cardew that sorta tied'em together for me. It went " At the sound of a champagne cork popping commence animated social intercourse. Under the cover of the din, surreptitiously improvise." Now you ain't never gonna get a chance to experience the creepy, barely audible din of them insects. But you'll come damn close if you chose to investigate the menacing stillness & frantic skree's that Nmpergin burrow in & out of on this release. Their blats, toots, sniffs 'n snorts are punctuated by (what seems like) long periods of "nothing", but what's really happening is that anxious silence is propelling their improvised narrative. On 'Devote....', Nmperign's black holes & raw responses are as organically germane as anything you'd find in the works of The Scratch Orchestra, John Cage or Group Ongaku albeit less concerned w/minimalist intent but goin for more avant rapier content. That feeling also comes swarming through on their dbl cd release w/electronics/sampler extraordinaire, Jason Lescalleet entitled "Love Me Two Times' (on Intransitive Recordings). Lescalleet is an excellent sound spackler, & his clips of Julia Child, Mr. Rogers & other assorted characters-as well as his droning forward motion-compliment's the Nmpergin duo so fully that I cannot be reminded of anything except perhaps 'Love Me Two Times' bein a deconstructed, experimental translation of 'Journey To The End Of The Night'. You heard me. Each take's his stab as Bardamu & leads us through the unchartered darkness & like Celine's masterpiece, it's many brilliant strokes of paranoia, hilarity, misanthropy & absurdity, occasionally all in the same breath. Nmperign & Jason Lescalleet ain't afraid to attack & sting, draw a little blood even, but they do it as cockeyed doctors practicing in the name of wit & wisdom. So go ahead, lift open your brain.Inoculation never sounded so postgnarlsome.
(for further info, contact; http://www.siwarecords.com/
& http://www.intransitiverecordings.com/)
Posted by Siltblog at 11:32 AM

Funny, when I was a kid, there was a bubble that grew on the wall between the kitchen and family room. A gent came over to investigate, and he put a stethoscope to the wall. A brief listen revealed a busy colony of bees. "Know what's between those bees and you?" the gent asked us. "Paint."

These spas from our Elite Spa Range through to the premium Saratoga Spas are from well established spa manufacturers who have been producing quality spas for a long time and use only the highest quality components and are all 'Hand Finished'.

The range of Spa's that we stock will suit any individual budget and/or hydrotherapy requirement. The manufacturers that we deal with for our range of Spa's only use the most reliable equipment, such as proprietary jets and fully compliant European CE and TUV approved pumps, heaters & Controllers.

Our range of Spas start from as little as �2995 through to �13000 for our largest luxury spa, so click on the links and explore our range of Spa's and we think you'll agree that our these spas offer great value for money, performance and quality.
[a href="http://www.celtic-spas.co.uk"]Hot tubs | Spas[/a]
algecide http://www.celtic-spas.co.uk algecide