Grab The Cash With Both Hands & Make.....The Galactic Symposium LP 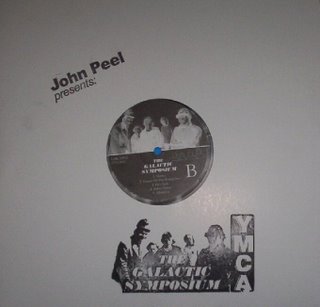 Before the advent of Karaoke & the wholesale bum-rush of the wretched excess to take a turn at becomin a blithering idiot behind a microphone, murdering the classics fell squarely on the shoulders of more-shall we say-idiosyncratic artists who'd occasionally toss an egg in the direction of various icons beloved by the doe-eyed milieu. Lol Coxhill, Steve Marcus, The Residents, they's all delighted me w/their clever 'n audacious cracks at the Lords Of AM/FM & who out there didn't smirk knowingly the 1st time The Flying Lizards cover of 'Money' crossed the ol' ear holes? Killdozer's drank from the well, Culturcide bared their teeth in disgust & why Meatus Murder ain't on Broadway is a ponderous quandry, but let me back up a sec. Or fast forward, whatever. What I wanted to say was the one group/record that falls squarely into assassin's catagory would be Galactic Symposium & their slaughter of 'YMCA/Money' on a 7" back in whenever. Sounding like the Portsmouth Sinfonia w/hoof & mouth disease, the savage rendition's of these...staples....helped propel their lone single into the inner stratosphere of 'John Peel Favorites'. Which would explain why his name graces the cover of this recent lp chock full've rib tickling deconstructions such as 'Paranoid', 'Alright Now' & 'Sunshine Of Your Love' among others (including the aforementioned 7" cuts). Supposedly all this was culled from a cassette somebody found at a car-boot sale, sent it to http://www.lowdownkids.com/ & presto! Instant lp.
So is it any good? Uh........sure! It's funny & you know, like any of this kinda stuff, a little bit goes a long way (w/me anyways). I never thought I'd want to listen to 'Baker Street' ever again but I was wrong. Now after hearing The Galactic Symposium draw & quarter it, I can adamantly make said claim.
Yeah, it's neat. Novel you might say. But I don't know. After a while it got a little too Wesley Willis for my likin. I know they's just takin the piss & there's no exploitation or whatever goin on & it is genuinely FUNNY, but still. If joke rock is your bag, these guys deliver great sheets of laughing blotter that are as sustainable as those found within the recorded works from everyone like Sebastian Cabot on down to Hybrid Kids. Real People snarks might not dig & snub their noses at it, but the 25$ I plonked down for this was real enough so that's all's I'm sayin. Them yuks don't come cheap, so if you wanna spend your money on snorts that're less adamant but equally abrasive, go buy a Blowfly album. Them shit's is hilarious too. See this? What do I care. Peace out.
http://www.blowflymusic.com/
Posted by Siltblog at 2:00 PM

I dunno, Woodbe. Reducing the achievement of the Symposium to laffs surely misses something. They are to Blowfly as Frank Sinatra is to Eartha Kitt, or as the Angry Samoans are to Black Flag. Better, if you will. Something that might help, and that they might have intended to point out, is that getting over the fact that the songs are the songs they are, and mean what they mean out there, is, well, possible. And finding an ethos-adjusted riff from radioland beautiful and surprising is easier for me than mustering a chuckle out of "Shitting on the Dock of the Bay" this year - and that's my favourite Blowfly number (does that make me anal?).