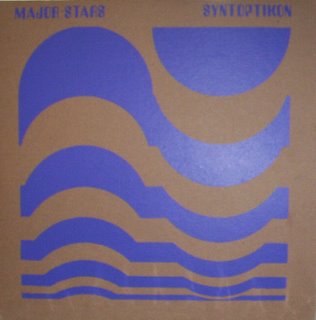 I must say that I have been a fan of Twisted Village since the days when I was holed up in an attic in Milton, Connecticut way back when (translation: once upon a time).Back then, I'd been runnin a milkshake stand down in Ridgefield & just for fun, I'd spike'm w/a couple've bumps of fresh nutmeg. Ya know, to help make the day more interesting. Anyway, it got to makin people sick & once they figured out the culprit, my goose was cooked. So I hightailed it outta there & up to Milton to lay low. One summer's day I went for a drive & came across a bake sale outside the Cavalry Church there in Litchfield. I stopped & had a look around. There was a lot of delectable pies 'n cobblers to be had & everyone was right nice. Then off up under a maple tree I seen a beardo standin behind a card table full of records. They wasn't in any order, just scattered all over. I said hello & he just nodded his head. He was eatin a persimmon & seemed to be enjoyin it. So I got to lookin through what he had. There was lots of lp's by Harvey Mandel, Rory Gallagher, Robin Trower, Quicksilver Messenger Service, Ten Years After, etc. Then I came across this homemade lookin thing that read CRYSTALLIZED MOVEMENTS & the title was 'Mind Disasters'. There weren't no prices on any of'em so I held it up & said "how much?" The dude was really gettin into that persimmon 'cause seeds was spillin down both cheeks 'n all he could say was "umnumnumnumnumnum...." or somethin to that effect. He pulled his right hand out've his pocket, help up three fingers & nodded his head again. I threw him a fiver & skedaddled back to the car. So I go 'n play the record & man was I hooked. These guys was conjurin up a psychedelic maelstrom that nobody was hip to at the time. It got so I was playin it every day, louder 'n louder, till one time the cops come by & told me to knock it off. I could tell one've of'em had TF ("that feeling") 'n while they just scolded me, I knew it was time to go. Parts unknown....here I come.
I won't bore you w/the what-comes-next part. The bottom line is the main fella in that band, Wayne Rogers, hooked up another likeminded sonic garrotter, Kate Biggar & for this many years they have been makin outstanding records of panic-psych under a myriad of aliases, none of which have been more incendiary than Major Stars. As a quartet they were pretty unstoppable but a little while back they went 'n upped the ante, promotin long time bassist Tom Leonard to 3rd guitar, bringin in another bassist, drummer & fulltime singer. In the words of Mike Rutherford "And then there were six". To say that the latest from this sextet, titled Syntoptikon, is their greatest release to date is like saying it is the best record they've ever made. It's that good! Startin off w/(new) singer Sandra Barrett spinnin a tale about 'Cinnamon & Lightning', the guitars then proceed to howl down the field like a rabid scrum of rugby jackals, 3 ravenous carnivores whose appetite to eat you head cannot be whetted no matter how much lunch money you've got janglin in your pockets. All the while the rhythm section of drummer Casey Keenan 'n bassman Dave Dougan are gettin splattered w/blood & innards but it only seems to fuel the feral lust. And so it goes. Sandra comes out, sings some more then goes 'n unleashes the rest of'em who proceed to burn & pound a path down the highway to hell like it was a goddamn Satanic pig roast. And on the last track where they almost veer into '21st Century Schizoid Man' it's really just them kicking the livin shit outta effigies of Fripp 'n Lake for everything they recorded after that. And who could blame'em? Not me, shit I'm gonna spin it again!
And they've mobilized this behemoth as I write. Tomorrow, 4/28/06, catch'em in Brooklyn at a place called The Syrup Room w/Endless Boogie & Om & on Saturday 4/29 in Philadelphia at the Khyber w/Bardo Pond. You can get the lp locally at the Phila Record Exchange & if you live elsewhere write'em at http://www.twistedvillage.com/
Make sure & ask Angela to personalize yr box w/a portrait of one of her favorite Civil War generals. She'll be pleased as punch that you did!
Posted by Siltblog at 9:21 AM

dave dougan is the dood from the life partners who also rule: believe it, yes.

and which is the best crystallized movements elpee, by the way?

lotsa famous american writers have holed up in attics for a spell, especially in new england. something about the water, or the weird light in the afternoons.

the best crystalized movements lp is definitely mind disaster. that said, and i adore that record, it's not the best twisted village lp.