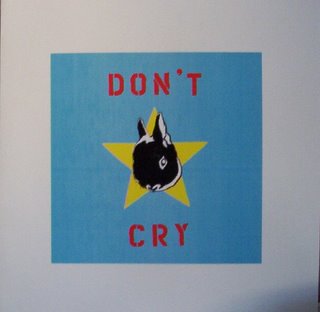 Mike Rep's got about a good've set of ears as I know, so when he sends us a record for perusal, we respectfully peruse. The guy's credentials are right on, whether it's on the topic of the Quota's, Vertical Slit, the 'Propeller' lp, Times New Viking, you just can't say enough. It's the stuff of legend & not just in his mirrors. But there's also the side to Mike that will honestly tell you that Nico was great right up till that last bike ride, or that Lou Reed might "still surprise us". Sentimental? No doubt, but the man believes & while I don't share his Quixotic notions I'll still give him props for holdin on. I suspect this was the side of him that wanted me to hear this debut lp by Mors Ontologica called 'Don't Cry'. Why the hunch? 'Cause if I didn't know better I'd guess the record was 30 yrs old if it was a day. Mors Ontologica chug out gravel throated, sax fueled, mid tempo rock that's aggressive in a pre dawn punk sort of way, not unlike the halcyon sounds of earlier fellow staties such as Rubber City Rebels, Bizzaros, Tin Huey or Numbers Band. Challenging but not in your face. Not yet anyways. If I close my eyes when this is playin I can still count the mile markers on 77 between Cleveland & Akron, the smell of molten rubber flarin in my nostrils. A room full've flared jeans, down vests, earth shoes & feathered hair comes flashin back. And them's the girls! Not the most pleasant of memories, but what the hell? Somebody was pushin the envelope. And it was fun. Then. I don't know that I need a reconstruction now but I appreciate the spirit emanating out've of 'Don't Cry'. It's challenging-again-but this time there's plenty of water under the bridge w/many swimmin holes to choose from. I ain't the same hopper I once was, fuelled on Black Label & Marlboro's, boogie'n down to aggressive strains of forward motion barroom rock. But maybe this is the current that floats your boat. Mike Rep's got his skipper's hat cocked at a jaunty angle & is on board w/Mors Ontologica. And while we obviously saunter w/2 different set've sea legs I'll have to agree w/his cabinboy on this; he might not always be right, but he's never wrong. Toot, toot, thar she blows!
(contact Mors Ontologica at; mors@vssrecords.com & ask for their limited edition cd while your there)
Posted by Siltblog at 8:01 AM

Heonce heard a lecture of mine delivered to a small assemblage, on thenovel subject of the amateur slut dream as the fulfillment of a wish.'This chanted recitation seemed to have a hypnotic effect on thefreckled boy; his big pupils ficken unzensiert ohne anmeldung contracted each time Abner came to therepetend, Name yours.On account of the intimate relation of dream fear to neurotic fear,discussion of the former obliges me to refer to gratis schwaenze moesen the latter.But when they arrived at New York, she foundto her great regret, that having unpacked and taken out her smalltraveling desk, during her short stay porn movie in Philadelphia, she hadstrangely left it behind in the closet of her room at the hotel.