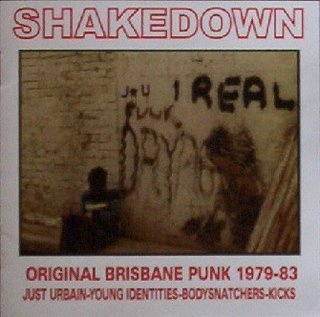 Since we was just harpin about goins on in the land down under, now's as good a time as any to keep it up. To reiterate, the Aussie Punk basket has been spilling over w/steaming eggs of greatness since the inception of said genre & if you weren't there at ground zero when any one of the immortal platters was unleashed on a pickle-eyed public, there have been many upon many compilations released so's to catch up & be astounded by such a sharp 'n dapper output. For instance, the two 'Murder Punk' volumes & the 'Can't Stop It! one are indispensable as cream skimmers for both the deranged & detuned. Then just when you'd thought they'd covered it all came a Bloodstains entry ponyin up w/some very curious omissions that was as bewilderin as they was breathtakin, especially the entries by Just Urbain (aka Section Urbane), Young Identities & Bodysnatchers. Seems these bands was all from Brisbane & was buried in the shadows of Radio Birdman & the like, but their brand of D.I.Y. halitosis was the breath of severity I'd been looking for. After some investigatin & favor callin I come to find out all these bands was on a label called Savage Music/Shake Music & any of the records I'd be wantin weren't likely to come around anytime soon. Then I got an email from Rich Stanley at Dropkick informin me that his label had flogged together a cd compilation entitled 'Shakedown; Original Brisbane Punk 1979-83'. On it was everything from the Savage/Shake discography, meanin all the cuts by Just Urbain, Young Identities, Bodysnatchers & most've a cassette release from a band called Kicks. What can I tell you? Wrappin my brain around the sheer awesomeness of this collection is staggering. It easily ranks at the top as one of the all time BEST of ANY label comp, but also matches up completely w/the whole of the Messthetics/H2D series which is one tall order if you's ask me. Granted, after a while the Kicks tracks start to resemble a bridge over the river Goth, connecting Bauhaus to Ronald Koal & The Trillionaires but I'm usually so blown away by then it don't matter. Readin the liners & stats, you realize that if you wasn't from Brisbane-or in one of the bands-chances are you'd never come across any of these records. Pressed in runs from 100-300 they wasn't gettin anywhere fast & didn't really give a shit to begin with. These was for the fried 'n few & if you didn't dig it, fuck you anyways. What they turn hands for nowadays who knows, but Dropkick has solved that dilemma for those of us not married into money or inheritors of trust funds. Like I said, great recollections from label honchos David Holiday & Peter Miller (both of whom was in Just Urbain) some photos, plus a track listing that won't quit, really just an incredible assortment of crud that I'd reckon most folks had no idea existed. If you've ever wondered what it would take to connect Door And The Window to Mentally Ill, here's your blueprint Franklin. Bottoms up.

thanks for the fantastic review,Roland.
It's so good to see that the stuff we did all those years ago is finally getting some recognition.
Just one point, the liner notes were by Dave Holiday and yours truly, Rod McLeod. I was in both The Young Identities and Just Urbain, so Dave got to cover the JU perspective while I rambled on representing the YI's.
It was Dave that actually directed me to your site, and I will be visiting again.