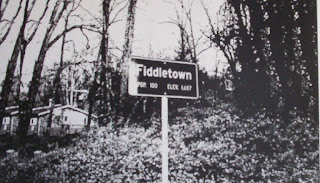 Just got some lp by a body(s?) called Folk Spectre whose uneven slink reminded me of a hazy night in Houston many yrs back, wrecked on darvon's & rum, tryin to remain vertical 'n left foot 1st as I slogged through the 6th ward (after attendin a Culturcide private party) back to my hotel somewhere downtown, 4th ward style. It sorta recalls the postoid Xpressway sounds of young NZ in the late 90's, you know, from whence alot of the New Weirdo's cribbed notes on how to sound improvisational. The earnest attempt to conjure up honest to goodness 60's-70's outsider aura's aint lost on me either, so let's just call this what it is; Brooklyn, 2008. As authentic & post modern as a farb at a Gettysburg reenactment. It did make me wistful for darvon, so hey, I guess that's something. How's it different from Spectre Folk? Write www.myspace.com/spectreflux for answers to this & other secrets of NY's 'music city' borough.

A split 7" from San Kazakgascar/The Master Musicians Of Hop Frog showed up from out Cali way & both seem smitten w/mid period Savage Republic though San K get the prize from best Ivory Coast tan. When Hermit The Flog ain't singin on the MMOHF track it sounds like it could be late night demo's from any've Siouxsie & The Banshees early 80's work. Guitarist E. loi has got John McGeoch's gothic twang all over him. Did someone say Razor Penguins? Quack, quack! Available via; http://www.latherrecords.com/ or http://www.urckrecords.com/

Word is this Factorymen 7" is a solo project from someone what's a member of Homostupids. That said, if you's a fan of the 2nd 7" release by that bunch-the one sided job on Richie Records-chances are your gonna enjoy a cuddle up w/this one. Fans of that Mattress debut should be charmed too, I'm sure. Frantic alien morse meltdown, both blip & blop, it makes me think 'n wish for the German Shepherds 7" on Siren that never existed. It would've been a dandy. And it is! Just now it's called Factorymen. http://www.bpdistro.com/


KDVS Recordings have another lp hot on the heels of the great 'Whose Your Favorite Sun, God?' one from last yr, this one by a duo dubbed San Francisco Watercooler. Honed by former Residual Echoes members Dave Novick & Jerry Encoe, SFWC is the dazzling result of a self imposed lockdown in Fiddletown, CA. The cannabinoid receptors are dead on, beamed into the psychedelic future of a sci-fi laden G Dead ancillary monster where Garcia still breathes lysergic air & one of those solo lp's-let's say 'Cats Under The Stars' for instance-has been regutted to sound like that ESP-Disk 'Electric Newspaper' collage anthology. Very humanoid lookin silk-screened covers to boot, surely not many made nor long for this world. Scoot off to; http://www.kdvsrecordings.org/ & secure a copy for your earthly abode.
Posted by Siltblog at 1:06 PM