A Tarheel By Any Other Name Would Smell As Sweet.....Bad Boy Butch Batson's 'Spare Parts' Lp 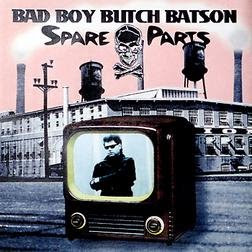 I got a cable the other day. I know! Who sends them anymore? Better yet, whose got the parts what to receives'em? Leave it to Fiona Finesse to stir up trouble though. She ain't never gotten over me. Not to mention a bloodhound's nose. The persistence to trackin me down is bafflin. So she sends this telex what come in over the wires to my Romanian landlady, Mrs. Valduva, downstairs. Probably got the only workin telex machine in the state. And Fiona was somehow onto it. So I hears these light thumps on my door & I knowed it was Mrs. V (see; her little hands is riddled w/arthritis so she can't knock. Instead, she rocks back 'n forth, bumpin the door ever so delicately w/the top of her head. It's like code, but not). I open up & she thrust the paper at me. "From da match-ine", she said evenly, "for you". I awkwardly took the cable, havin no idea what it was at 1st, & thanked her for the hospitality. She waved me off, turned as if to leave, then slowly came around to say "It for years since I hear the little voice.I think maybe it is the tzwika speaking. but no, is match-ine. Ah,is a sign! I tink from you wife. So you will leave now, yes"? I laughed & smiled at her. I said, no, I didn't have no clue what she'd just handed me. There weren't no wife (in the Christian sense) & I'd let her know when I was fixin to head out. She waved me off again & headed back down to her parlor.

So I take a gander at this message;

*HEY WOODBRAIN YOU CAN'T SHAKE ME BUT AM WILLING TO
*RESPECT YOUR SPACE. I SEE YOU ARE WRITING AGAIN. YOU
*NEED TO HEAR SPARE PARTS BY BAD BOY BUTCH BATSON. IT
*IS SO FAR UNDERGROUND YOU MIGHT HAVE TO CHECK UP YOUR
*ASS TO FIND A COPY. THERE IS SOMETHING INHERENTLY CARNAL
*THAT BRINGS BACK MEMORIES OF OUR AFTERNOON SPENT UNDER
*THE CASKET WAREHOUSE. REMEMBER WE WILL ALWAYS HAVE BURNT *CORN.

What a charmer! And to think I'd all but forgot our trip to Burnt Corn. Young lovers tryin to sate they's passion in an antique village. The things you conjure up ,grrrrrr! But that was a long time back. I don't think I'd bust a nut down in the moss 'n mud for nobody nowadays. And she don't seem to recall that copperhead. She's lucky I spotted it when I did. Rat snake my ass! If that thing'd bit her in the snizz, she'd still be swollen tighter than a Christmas goose.Women! They likes to pick 'n choose the memories, don't they? But she has a damn fine set've ears (among other things), so I set about gettin a copy of the lp she was hippin me to.

Procurin this'Spare Parts'album weren't so hard. Funny thing about it, say's it's material from 1998. It's hard to know if it's an lp what's been sittin around all them yrs, or if someone ponied up the snuff to see the material finally realized some 13 yrs later. Either way it's a humdinger. Batson's one of them enigmatic 'real people' types. Your glad he's out there (& OUT THERE) but at the same time, it's comfortin to know you ain't likely to cross paths. Like the best of'em, the battle between tenacity & narcissism is hand to hand, so the results is exemplary in a combination of knotty weirdness, inspired wildness & at times,just plain hilarious. Imagine a cross between Butch Willis & Alvaro. Or if Bruce Cole went & made a record w/Smegma. It's that kind of whack. And as such, a dead on keeper + one for the ages. Comes in an appropriately designed silk screened jacket + a lil booklet w/pics, lyrics & personnel. Stop on over to http://www.tediumhouse.com/ http://www.mimaroglumusicsales.com/
or http://www.fusetronsound.com/ to procure copies. Then go direct to http://www.badboybutch.com/index.html to find out all you'll ever need to know about the man. I'm sure it's quite a story. Just look at him! How could it not be?
Posted by Siltblog at 8:26 AM