The Medium Was Tedium.....And More 7" Reviews 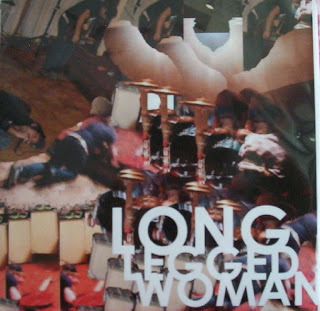 I can't rightly explain why it's taken me so long to come up w/so few reviews. Alls I can say is that I have been up against it, I tell you what. I spent this past week over to some rock critic shindig in Rochester, NY & the minute I walked into the main conference room at the Strathallan, it was clear I'd made a big mistake. There was all sorts've bleating goin on about Shitgaze, etc. At one point I had many a English person askin me if I personally knowed any of the Psychedelic Horseshit fellas & was it true they preferred an English Shower? I took that to mean no showerin at all & nodded my head yes, laughin the whole time. The things people's want to know! I watched 2 lip flappers debate on which Leslie Q lp was best, a high school class what come up from Snipesville, Georgia to read papers on their favorite Jandek record & why, slept through a symposium on early Wire vs. the current one & was generally bored to tears. I'd been asked to attend and debate which was better, Columbus bands or one from Cleveland but that was on Saturday-the final day-& I reckoned I'd be long gone by then. To tell the truth, I spent most of my time eatin from chef Ethan Drake's menu down to The Grill, the inhouse restaurant there at the Strathallan ( I particularly enjoyed the Foie burger which was seared foie gras, bacon & beef. What's not to love?). Funny thing was there weren't no bands playin, just a lot've opinionated folks soundin off on things they cared about more than they knowed. I sat through one q&a when some rotund fella from Mexico spouted off something about the hegemony of Siltbreeze. He was eatin a hotdog, mustard & relish runnin down his porcine cheeks & talkin a mile a minute. There was something he mushed about Siltbreeze being a clearing house for clowns or bitches but no one knew what the hell he was talking about. Afterwards I went over to the buffet table where he was loadin up another coney to ask him how he'd got his head so far up his ass but he seen me comin & he shot outta the room, the speed of which I ain't never seen from a man his size. Maybe he oughta give up on the rock crit game & give them Mexican Olympic trials a go. Anyways, by then I'd had enough. The whole things had just confused & saddened me. But I guess I had it comin. After all, I did agree to attend even though I knowed instinctively what would play out. Not all of it was a wash, there was plenty of well informed folks, but the ones what try & come off like they's 'keepin it real' was just half-assed pedants who seemed more ego driven than knowledgeable. Or just jealous. Either way I guess. I didn't think the Mexican fella was a total idiot. I mean, he's gotta go to sleep sometime, right?
But that was last week. Today I went & listened to these here records & a fine pile they was. Have at'em.

Florida's Dying has gone & taken a dip in the Moselle only to wash ashore w/a 7" of brimstone howl via The Feeling Of Love. One side of this is deep in the synth/dark wave scheme that's taken western Europe by a storm, I esp. love the jabberin what sounds like Chicken Little hysterically tryin to place an order for the entire henhouse minutes before the last frites stand in Metz calls it a day. The flip is two scuzzy ramblers that recall the stripped down, how-do-you-do fuzz barrage the Workdogs excelled at so many, many records ago. Stick that in the cuff of your jeans & torch it. http://www.floridasdying.com/


Listenin to the a-side've the Dead Clodette's debut 7" I was inexplicably reminded of 'Chinese Gangster' by Warm Gun. It ain't a bad thing by any means, I liked that bunch plenty & it I could put my hands on their ep I'd give it a spin & see they's anywhere in the same orbit. The flip on this one moves nicely along too, remindin me of a femme version of Tyvek. Initally I dug the bass heavy mix but upon repeated listening-mostly to try & figure out if my tone arm needed adjustin or if it was just a fucked pressing (bingo!)-the skips started to drive me crazy. And seein as how this thing cost 12$ to order direct from France, I do believe I got the shit end of the stick. They's certainly got promise, but business via French Vinyl has got to go. www.myspace.com/trashmondainrecords


Is it me or does a band called the Pizza's scream Rip Off/Goner style lo-fi garage/punk pogoholic voom? Chuck Taylor & Doc Marten is all over this one. No suprises here but I reckon that's how they want it. http://www.daggerman.com/


Long Legged Woman (I think) is somehow connected to an outfit named Butt Savage but that's a quandry for another day. On this they certainly run the gamut, the a-side entitled 'Something Is Pressing Against It From The Outside' careen's around like Eat Skull covering 'Sedan Delivery' inside a Robotussin humidor. Side B has a remarkable Xpressway like quality to it's aura. Could be outtakes for either Jefferies brother 7" or a distant demo from an early incarnation of Plagal Grind. Who knew?
www.myspace.com/longleggedwoman


It's kind've remarkable to see the sand in the face, post hardcore aggression made famous in the late 80's by way of Touch & Go or Amphetamine Reptile finally catchin on in Columbus, Oh some 20+ yrs after the fact. Sure, Monster Truck 5 were lubed for action around '88 or so but that was a quick spurt & since then......
Now in the space of 7 months there's 2 releases from the CDR folks what is primed for a blood letting & string mangling bonanza. Necropolis burst through the door 1st w/a new sneer & face full've warts & now this outfit called The Unholy Two have followed suit w/2 pus filled boil poppers. Their unhinged caterwaul calls to mind a more distempered Clockcleaner & for a moment there as the 1st track was beginnin to distort, I swear I almost heard shades of pre Shadoobie Boredoms. From a Columbus band! Hey, if they cozy up to some blue chippers maybe these guys are next in line to curate a teenage riot or at the very least, adopt some (free) kitten's. http://www.columbusdiscountrecords.com/


De Stasi is a small label outta Finlay, Oh which seems to be forgin a foundation similiar to another midwester legend, the mighty Bone Air label. Of course we all know Bone Air was only around for 4 releases but what massive releases they was! So far De Stasi has done 2 TV Ghost records & excuse me for sayin so, but their lp is one of the best things I've heard in a long time. I know I never seen fit to review it here & that's my bad, as it is a grower of Herculean proportions. As great as the 7" is, steeped in a slithery, meth flaked Crampsish brine, the lp dominates w/some unclassifiable Goth vibe, like a heavy metal Goblin on acid. Anyway, a fantastic record & one to keep an eye peeled for. Now there's 2 new dudes on the block, one from somethin called Leper Print what possesses a ton've charm & diy punk propulsion. With heart firmly implanted on sleeve this little record spurts geysers of happy, squidish ink, 2 of the tracks resemblin the late great Toxic Shock while the 'Dead Flowers' tune marches along w/the ack ack attack of The Urinals (whom I'm assumin this is in tribute to). Zola Jesus is a chanteuse from Indiana who I'm told is one of the leading architects behind some sub genre called Crimson Wave. Excuse me for tryin to wrap my brain around this, but what does that mean? The undertones is certainly ripe w/Freudian connotations, conjurin up both castration anxiety & penis envy. And I know West Lafayette is a college town (go Boilermakers!) so let's leave this one on the shelf for blabbermouths w/majors & electives to concur or refute. So.....Zola Jesus. As charmin as the tape hiss is on this lo fi gem, that voice don't lie; this gal's got some range! Like the aforementiond TV Ghost, Zola Jesus traverses across some gothic terrain, but there's also tinges of Vega/Rev action, Cab Volt twiddle & an almost ESP like understandin've Amy Camus alter ego. Whatever it is, it works. So call it Crimson Wave if you's must, just don't lame up in the process or I will PERSONALLY see to it that Zola Jesus cuts off your balls & feeds them to you for supper. The Woodbe reach can be ruthless, beware. www.myspace.com/diestasi www.myspace.com/leperprint
& www.myspace.com/zolajesus

And on the eastern seaboard, this label what's called Sacred Bones is sort've a Castor to De Stasi's Pollux ( or vice versa, I ain't tryin to play favorites) & is also burnin bright w/a roster've solitary crawlers. The one from Nice Face hustles along in warm currents that sounds like Chemicals Made From Dirt tacklin outtakes from Taking Tiger Mountain By Strategy. Dead Luke's debut also soars through the darkness, carpetbombing the bogs w/sonorous voce, layers of grock & stinging guitars. Seein him live down to SXSW this yr was one of my highlights. His flare'n understanding of early 80's regional wave is pretty spot on & the label itself seems primed to showcase this sort've genre much the same way them Sub Pop cassette's (#5 & #7 was the ones I had) served as fulcrums to inform a few hundred of us as to the talents of Neo Boys, Sport Of Kings, Zyklon, Ray Milland & a few others. My trousers maybe ain't tight as they once was but that don't mean I forgot the moves. The lp's from Pink Noise & Factums is winners too. A round've beers would be the ticket were we in the same room, but as it stands, one made've applause will have to do. www.myspace.com/nicefacetheband
www.myspace.com/bornunderadick & http://www.sacredbonesrecords.com/
Posted by Siltblog at 11:32 AM

tom, thanks for the info on tv ghost. i think i scored a copy from puke n vomit. we'll see. see you at friday's show, i hope the sic alps vinyl will be there, along with the important 7". mark

hey woodbe - -
what's your beef with the british?
did some limey get rough with you back when you were still working times square?
get over it man.

Tom I'm in chemicals made from dirt and Taking Tiger Mountain is one of my all time favorite albums. Maybe we should try to cover it. Good idea! Doug Milman

it's a really nice blog thanks for add my comment...

Play you bingo games, learn how to play bingo, online bingo games with us and if you want to read bingo rules and all about bingo games then click on www.yourbingogame.com and get fun all your bingo games.Your Bingo Game

it's a really nice blog thanks for add my comment...