A Dodger In Mets Clothing.....Night Wounds 'Allergic To Fire' LP 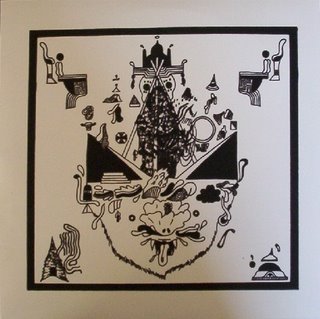 It is nothin short of a goddamn pleasure to encounter a record from a Los Angeles band what's got it's limbs 'n lungs attuned to avant styled scraping's. The Thin Wrist label ably provides as much w/every release by in house trucker's like Open City or Curtains & the Not Not Fun collective have a veritable Spahn Ranch of sonic assassins loose on the landscape as well. And as if that weren't enough, here comes this long player from Night Wounds bringin it's own brand of aural slaughter to the barnyard. Released on the Woodsist label, 'Allergic To Heat' is a solid block of dunt that fuses the distant Kraut thump of nascent Savage Republic w/the No Wave distillation of (early) Silver Abuse & End Result that's capable of peelin both skin 'n paint, either of which is dandy by me in these frigid times (I could stand to lose a couple pounds & an apt. makeover wouldn't hurt). Not that I'm insinuatin Night Wounds studied the moves of any of them bands. Hell, for all I know, they might've work up one mornin, heard something by Sightings or Blues Control, thought they was Pop bands & figured it weren't a bad racket to be in. Some people's got strange notions. All's I know is that they's armed w/both squall 'n thunder & hats off to Woodsist from providin the lightning to ignite this record like a Mars bonfire. Nice screen printin on the jacket too. Let's see...a NYC label makin itself available for an LA band...I do believe we's all FINALLY startin to 'just get along'. Amen for that!

Very good article，I prepared a very good gift for you, please visit my blog, The best browser fo you in History

About time someone outside of LA picked up on Thin Wrist and the Open City/Curtains axis. Tuesday had the 2 piece sans drums version of Open City play the Smell. Whoo yah. TW has some of the best lp quality releases around (sleeves, vinyl) and Spencer Yeh stuff