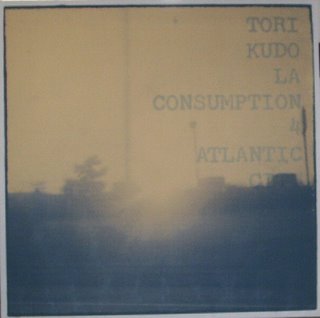 To say that Tori Kudo is an enigma would be a supreme understatement. At least in my culture bunker anyways. The first encounter w/him was the Noise/Tenno cd I bought at Adult Crash way back in '97. That cd, w/it's eerie ecclesiastical organ hum & fragile human vocal ache was so supremely devastating that I actually resorted to a little research to find out all I could about it. Turns out it was a re-release from an obscure lp whose origin went back to 1980 & was the work of one Tori Kudo & his wife, Reiko. Then a little bird hipped me that Kudo was the kingpin behind a band called Maher Shabal Hash Baz who had released a 3 lp set entitled 'Return Visit To Rock Mass' the previous yr & was still around. I looked into it but found that the dollars asked to obtain a copy was more than my trust fund would allow. And since I didn't know where any bodies was buried, it wasn't likely I was gonna be able to blackmail anyone into gettin me a free one. I did get to hear some of it once & I dunno, maybe I was fightin the demons of covet, but it sounded awful cutesy-pie to me then. I know there's a ton've stuff out there now & I am curious to give that horse another ride, especially since I've been diggin this new archival release of his entitled 'Tori Kudo/La Consumption 4- Atlantic City' that's just out on the Siwa label.
I seen it in the store the other day & asked the fella behind the counter to tell me what he knew. From his description it sounded like it had all the bling I was lookin for; one-man-alone, armed w/guitar, 4-track & pignose amp, holed up in a cheap motel in Atlantic City sometime in 1981, pourin his cracked heart out in fuzzy confessional mode. What's 20$ when you can walk around sportin a rock like that? Sold! So okay, it turns out some of the yarn is apocryphal; the insert says it's recorded in NYC & the only reference to AC is the title & perhaps the cover photo. And on a couple've tracks he's joined by 'La Consumption 4' but that's all it says. Other than that everything seems on the up 'n up & I don't know if it's 'cause it's from a bygone era that nailed the pitch, but this is a flawless gem of early 80's idiosyncratic knuckleball shine that delivers & delivers hard. So hard in fact that I am adding it to my starting rotation that includes other likeminded bafflers of the art such as Alex Chilton's 'Dusted In Memphis', Little Stevie McCabe's 'Sweat It Out', Eric Hysteric's 'The Crazy King' & Michio Kadotani's 'Rotten Telepathies'. You can shake 'n jumble them letters anyway you like, but around here they always come out spellin 'Cooperstown'.
So yeah, great stuff. All's I need now is a few more lame promo's & I'm goin right up 'n turn'em in to get that MSHB cd that's out on PSF. Who knows, maybe I'll be eatin crow for dinner that night. I've been told if ya cook it right it's deee-licious!

rock mass really grew on me over time. i, too, found it a bit cutesy at first...glad i didn't sell my lp set in an ebay panic, though.

the "la consumption" lp and live mhsb cd on psf are both really super.