Would You Eat The Moon If It Were Made From Ribs? Meatus Murder's 'More Songs About Balling And Food'. 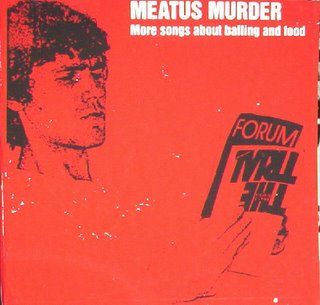 So a little backstory is in order. I found this thing plunked down inside an empty box of Girl Scout cookies behind the computer in the Siltbreeze "office" while I was cleanin the other day. Ya know, I'm just tryin to do my job, but when the area is filled w/empty Mallow Cup wrappers (sans coupon of course) & discarded bags of half eaten Andy Capp hot fries-not to mention all the empty cartons of chocolate milk-it get's too goddamn depressing to even try & think. I mean, what a fuckin pig! So I'm trashin the fat fuck's excess when I come across this box. I shake it to make sure that it's empty but I hear something rattlin around. It don't sound like a cylinder of cookies so I dump it on the desk to see what's what. It's this Meatus Murder cdr. I figured it was some porn dvd that ol' Lardass was hidin ( I mean, look at the cover. It's rather suggestive. And what the hell is it doin in a cookie box?). I got to readin the insert & realized it was a cdr of somethin, but the writin was so cryptic & inside, I didn't know half of what I was readin. I figured I better give it a listen. Well, I wasn't prepared for what I was about to hear. How do I explain it? Okay, imagine that the Meatus Murder folks are the Japanese Imperial Navy & Pop Culture is Pearl Harbor. These guys just divebomb the livin shit outta everything! Sports figures, tv & movie actors, rock stars, fast food & beyond, all done as interpretations of songs by....you name it; The Animals, Bowie, Lou Reed, Joy Divison, Orange Juice, et al. Wire's slashing 'Three Girls Rumba' is reduced to a pickling recipe. New Order's "Love Vigilantes' becomes an indictment on Popeye's Chicken. Some fuckin Nick Cave song is now an ode to Garfield (& not the Henry Rollins one either). No one is spared. If hilarity is a guillotine, then 'More Songs About Balling And Food is a comedic Reign Of Terror. In the words of that ol' Jacobite, Robespierre "Omlettes are not made without breaking eggs". Dude, I hear ya!
If your the sort that thinks Culturcide's 'Tacky Souvenirs Of Pre-Revolutionary America's is still a hilarious, scathing commentary on the chicanery of big business monkeys, then it's time you logged in for a hot new injection of spear chucking courtesy of Meatus Murder. Contact'em here'; squirted@gmail.com
Posted by Siltblog at 8:26 AM