Pass The Ketchup, I Think I'M Morrie....Cheeseburger & 'Gang's All Here'. 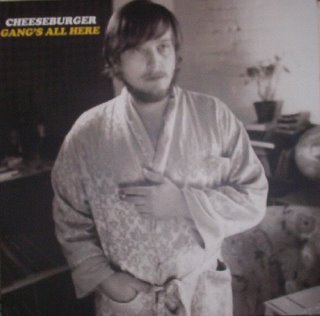 First off, I wanna say when I seen these guys a couple months back, I thought they were pretty rad.The only reason I mention it is 'cause they were openin for some band called Diamond Nights & it wasn't free to get in so whose gonna show up-& PAY-to see 2 nobody bands even though they'd come all the way down from Brooklyn? Ha ha, not me! I found a discarded pizza box, sorta held it just so & went to up to the doorman & said I was makin a delivery. Don't you know he let me right on in! No id, no nothin, hell, you'd a thought I was some kinda VIP the way he scooted me through that door. I just made my way down a bit & then into the band room, walked back to where there was a kitchen/lounge area, set that pizza box on a table, wheeled around & made my way out to see Cheeseburger.
And they put on a helluva show too. Like I said, there weren't hardly any people in the place & the chubby little singer seemed upset & kept makin "jokes" about it. His wit was a blend of sarcasm, depreciation & bitterness. He was like a portly Alan Sues w/the banter. At one point he ripped "do you assholes know any good jokes?" & somebody shot back "Cheeseburger!" & I though Tubs was gonna cry. He got real mad & then the band kicked into a song & he shot across the stage like a lard-filled Jackie Rogers Jr, beltin out somethin about cocaine. I couldn't take my eyes off of him. He looked real familiar to me but I couldn't place it. Anyway, they played for a while longer, he made fun of the audience some more & then it was over. I bought one of their ep's from the drummer & split.

So finally the other day I decided to play the thing. I'd forgotten I had it! I kept lookin at chubs on the cover & that face...I couldn't figure out where I knew him from. I play the record & it's good, like a slow pitch softball cross between the Stooges & AC/DC. The song about cocaine ('Cocaine') starts it off & all the way through it's a solid 6 song ep. Especially liked the title track w/the sax work on it. Then it hit me....the guy looks like Morrie from Goodfellas! You remember; the fat, nebbish guy, he sells merkins, that wants to be a gangster? That's him! Go ahead, tell me them two don't look exactly alike. And my name ain't Roland Woodbe.

And that's that. Whew! I'm glad I finally figured it out. Morrie Kessler.....fuckin 'A! Great cover, great ep. Lot's of crunch 'n blabber. Check on it here; www.cheeseburgernyc.com
Posted by Siltblog at 6:43 AM