Chapter 9, In Which The Rebel's lp "PRAWNS" Is Discussed In The Form Of A Letter From Lady Pembroke To Her Lover, Mustapha Kunt.... 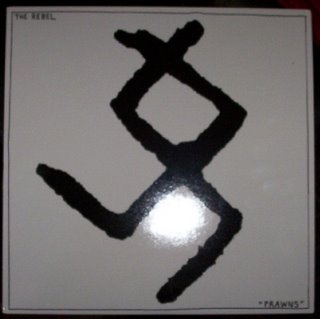 
You have only just left my boudoir but still I am a quivering mass of giddiness. With every visit you continue to open the doors of my unconscious eros. How I long to immerse myself in your man musk & bodily oils. The salt of your fluids is akin to the purest absinthe to ever cross my lips. When you demanded that it was time for a tea bagging, naturally I thought you were taking into account my English heritage & our proclivity for tradition. I had no idea that was what you meant! When you climbed on top of me, straddling my alabaster face with the firmness of your savage loins, I was as dizzy as a kitten in a tree. The sweat that drizzled down from your jewel purse, into my mouth & down my throat exploded with the flavor of a piquant licorice that had been soaked in an ancient brine. A Godlike nectar, a lozenge of love lolling in my desperate maw. And then you exploded, christening me in a warm bath of gooey Turkish taffy, "hot off the press" as they say. I shall never think of Earl Grey so innocently again.
And also my love, our "session" record was extraordinary as well. The Rebel eh? I am vaguely familiar with his work in Country Teasers. Lord Pembroke likes to amuse himself playing their records as he shuffles around Puddingstone Manor. He says he is chuffed by their sense of mirth. If only the dreary old sod knew how devilishly alive I felt now listening to the soothing chaos of 'Your English' jumbling out've the stereo. The track 'What About Us?' could almost be a bridge between Ivor Cutler (RIP) & that rascally yank, Jerry Reed. Really! You didn't think I'd been listening to your American Country & Western records did you? Well I have. And I have the most amazing figment; you could be Jerry Reed & I could be Skeeter Davis. We could sing songs & mock each other, drink bourbon, take barbituates & make believe. Oh Kunty, isn't Prawns just the most brilliant album?! It makes me want to do nothing more than anything else. I'm also especially smitten w/his whole German fascination. The bloody sausage eaters! Oddly enough, while listening to the track 'Hitlers & Churchills' I could hear the unmistakable squawk of a parrot from off the telly. It was Churchill's pet Macaw, Charlie, repeating 'Fuck Hitler!' & 'Fuck The Nazi's!" at ear splitting levels. It's 104 years old! Oh darling, isn't The Rebel a genius! We must buy more of his records. He makes me feel like...... Ich bin auch ein Rebel, meine Liebe. Grrrrrrr........mein Liebe! That porcine talk get's me so randy!
But it is now time to bid adieu sweet Kunty. You & The Rebel have illuminated my once somber life & now there is a brightness, a glow, that permeates my entire body & soul. The Rebel has intensified my mind & you, my lust & desire. Tomorrow as we listen to 'Ham House Of Horror', I want you to chuck all inhibitions & penetrate me. Thrust hard, I want it to feel like Rommel driving deep into Egypt. Goodness knows Lord Pembroke is incapable of such carnality. It takes a Turk to do that.


All releases by The Rebel available from; www.therebel.co.uk/countryteasers.html
Posted by Siltblog at 4:28 AM