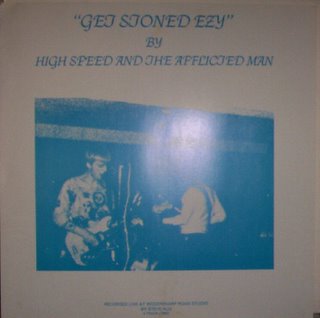 I know I know, shitty picture. But it's better'n anything I'd have found on the internet. Good luck searchin for an image of this fuckin thing there! It's rarer than hen's teeth. Or at least it was. I've been searchin for this record for the equivalent of 100 dog years, ever since a knowledgeable humbug passed it off in reference to the Highrise II lp back in the pony express days of the early 90's. And now here it is, or at least a reissue of it. My eyes just about exploded when I saw it in the A section at the Record Exchange. But the prospector behind the counter calmed me down a little by sayin it was a "boot". He said the original didn't have an image of a commode w/a flyin V guitar on it (like this one) & that it wasn't really "Made In Italy" as this copy claims. I guess that explained why it was only 10$. Still, it seemed like a fair price for such an obscure document. It was as close as I was ever gonna get. Sold!

Afflicted Man (or Afflicted) was the charming moniker of a Londoner by the name've Steve Hall. Up to this outing, Afflicted Man's style could best described at stock-in-trade Brit DIY w/an almost Street Level sort've quality to it. Then at some point Hall lost the Afflicted tag & went on to the Accursed, which was a decidedly Nation Front styled punk trio who knocked out (at least) 2 lp's. And somewhere between that transformation came this amazing anomally. Too freaked out for punks, too punked out for freaks, 'Get Stoned Ezy' is a bloodbath of pedal stomping carnage. Recorded & (originally) released in 1982, it must've felt like a rusty safety pin stuck straight through the heart of whatever DIY fanbase Hall had aquirred. And for all the Pink Fairies or Hawkwind type's that mighta come across it, it was too primitive & animalistic for their quid. And forget about the psych & prog clowns. To them this must've seemed like a soundtrack to the Manson Family. In a country where the pigeonhole is everything, this record wouldn't play by the rules, was deemed "esoteric" & banished into the fog. See ya!

But here it is, 2006, & out've nowhere this reissue seems to have appeared. Listening to it over & over, I could hear where the Highrise comparison came from. Thing is, High Speed & Afflicted Man seem way more protein deprived than Highrise. Too much fried fish & pint've bitters. Highrise have a way-on that lp-of tappin their talent buttons so it sounds like their inducing fuzz 'n feedback from all over the room. And the pacing is quicker too. 'Get Stoned Ezy' by comparison is about a gigantic discharge of static energy. When Hall lands his foot on the pedal, it's like an arc carbon exploding, showering you w/shards & sparks of mangled wah-wah rock. It's not about finesse. It's about pummeling you till ya drop. The back of the record even states, 'warning: this record is very powerful and could give you earhole damage'. A joke perhaps, but no more so than Mudhoney or any Black Flag record w/Henry Garfield as the singer. Ding, hello!

So as far as this & Highrise bein in the same boat, I'd say okay, but it'd have to be a pretty big boat. That said, I'd highly recommend this lp to anyone out there who'd wanna hear an approximation of what Saint Vitus would've sounded like coverin Les Rallizes Denudes . Or Vice Versa. Imagine that!

Yeah, High Speed & The Afflicted Man. 'Get Stoned Ezy' it's called. Can't imagine it's gonna be around for long-again- so grab it while ya can. Not that I know how you go about gettin a copy, but you might try here; www.midheaven.com

Hi, was reading your bot on The Afflicted.

I have a copy of High Speed and the Afflicted Man if you are interested in making an offer for it ?

It is totally original and un-played, never been out of its inner sleeve.