If Everyone Is Thinking Alike, Then Somebody's Not Thinking....Teenage Panzerkorps 'Gleich Heilt Gleich' 7" ep 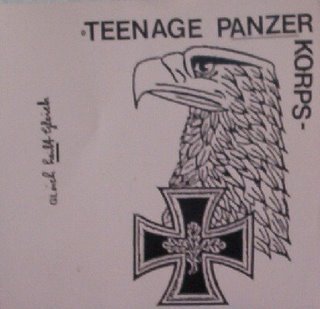 I heard a snippet of this as a 3" cdr a few months back & was intrigued. I didn't catch any info about it other than they were called Teenage Panzerkorps & ya gotta admit, that's a pretty rad name. Tank battles on the Russian Steppes.....good times! You find someone who you can discuss the Battle Of Kursk with, the strengths & weaknesses of, say, the German PZ III J vs. the Russian T 34 (M42 to be precise) & we are talking many steins of Pilsen my friend. Sigh.....uh, what was I talkin about? Oh yeah, so I was stoked when I saw this listed on the Aquarius site. I'm sure there are those of you that'll somehow-inexplicably- be offended by the band's name & perhaps even by the sleeve art. Mein Gott, beendet es nie? Please.....go listen to a Vetiver cd & leave the rest of us alone. The grownup's want to play now. Thank you.
So the rub on this project is that it's a byproduct of the Jewelled Antler Collective & some German buds along for the ride, released on an upstart label outta RI. I dunno, the website says (among other things) something about "early Neubauten" but how early are we talkin about? Pre Zick Zack? I don't hear Neubauten so much as I hear a faint resemblance to that P.L.O. 7" from the early 80's. And it sounds like outtakes from a Savage Republic recording session (also checked on the site). Actually more than anything it resembles a Lichter side project 7", "lost" somewhere between the Bridge & the Them Rhythm Ants ep's. Let's call it IP 2.5. You know what? I was just shootin from the hip when comparin that stuff, then I just went & played'em all back to back (to back) & it holds up pretty well! I knew I was good, but shit, that's damn near dead on. So yeah, cool stuff. To me it's less the clang from a German bunker circa 1980 than the dissonant rumble out've a subterranean utility tunnel in LA the same year but you can't have everything. Where would ya put it? It's a limited release of 300 & available here; www.skulltones.com
Posted by Siltblog at 9:15 AM

More like a SVT-40 rattling off over the drone of a 81 MM barrage. With a few 155 rounds coming in here and there