It's Like 'Oscar Automobile' But Different.....Car Commercials 'Jar' 7" EP 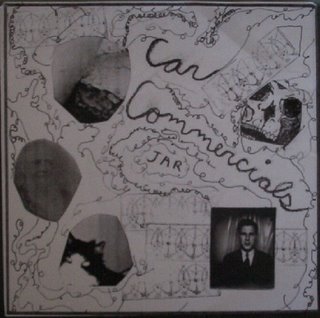 Daniel Dimaggio is the Orson Welles of Princeton, NJ. He is! Look at him; master of the airwaves behind the 'Strong Little Legs (RIP) & 'Giant's Of Jazz radio programs on WPRB as well as commander of flesh 'n blood charm peddlers Home Blitz & now this band Car Commercials. For all's I know he might even hate Gallo Wine & fish sticks too. He ain't alone on that count! I wonder what his thoughts are concerin Elmyr De Hory? Hmmm....another time perhaps.
Home Blitz you might already be familiar with. Many a two-cent's was tossed around on their behalf last year, extollin praise as how they ranked alongside Modern Lovers, Half Japanese & Electric Eels as genuine Real McCoy's of the American Underground. And I ain't sayin they aren't or they don't.I chose to abstain from the hyperbole not because I didn't have the change to spare, but on account I thought them was pretty big britches to fill. I don't put much truck in E. Eels 'n 1/2 Jap comparisons these days. Personally, I think I'd be more apt to consider the contents of my wallet readin something like 'Ron House fronting the Feelies' but it's that kind've reactionary pontificatin that make's this blog the contentious darling it is, right?
Hello?
Anyway's, w/Car Commercials Dan & co. have seemingly tapped into the wellspring of amateurish goodness what emanates from the source(s) of them Messthetics compilations that're gracing ears 'n airwaves (finally) nowadays. There's a lot to be said for the zero production skills, which in the right hands (their own), I'm always a sucker for.True, on occasion they come dangerously close to channelin the precocity of early Daniel Johnston, but most of the time Car Commercials nail it like they was stained by the same varnish & wax buildup as 49 Americans or Crash Action Winners. I'd also state for the record that in another time 'n place (take a wild guess) these guys would've lived high on the hog recordin for the Onset/Offset label alongside the likes of Les Bottletops,Toerag, Brothers Gorgonzola & other estimable strangers that have yet to be properly heralded. I know, I know, folk's is all the time sayin 'we are not familiar with these bands you reference'. But I am! There's a fine line between obstinance 'n ignorance & sometimes in the middle they become twain. What am I gettin at? How about; DON'T LET 25 YEARS GO BY BEFORE YOU HEAR THIS CAR COMMERCIALS EP! I can't make it much plainer than that.There's cassette's too. Collect'em all.

Finally, an honest to goodness reference to the Brothers Gorgonzola! I can’t believe my eyes. Goddamn, Woodbe, had you pulled that feather outta yer cap at the launch of the blog I woulda been readin’ the thing since the beginning. And I second everything you said about Daniel, Car Commercials and Home Blitz. I’m listenin’ to the new Lee Rockey Music LP at the moment and it’s very much on the money. You got ears fer that sorta stuff? Good Eve - Trouchon

I still can't get over the Public Disturbance cover on the Home Blitz/Friends & Family split cassette. That's keepin' the KBD and the Messthetics close to my heart.