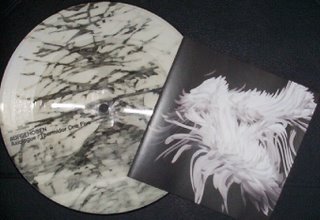 How many of you's out there can remember when Einsturzende Neubauten was scary? Or Swans? Granted, it was a LONG time ago, but them 1st two lp's from EN was radical soundin back in the early 80's. They took the whole Industrial Music theory from Throbbing Gristle & drove it to it's literal conclusion. Swans (when they was formidable) was like a more menacing & calculated ('n loud!) extrapolation of what Whitehouse was goin on about, 'cept w/Swans it seemed "real". Of course that kind've aura is capable of lastin only so long till folks become immune & it's on to the next scam. Then Borbetomagus became the fearsome castrators of hipster chattle once indie rockers started allowin (Free) Jazz & Improv racket into their sleepin bags. Since then it's become a lawless harbor of noise, akin to the ancient pirate mecca of New Providence. They run the gamut of workin the con though most just seem dopey (like Blixa's hair) or clueless (like Jarboe). But as w/the pirates of yore, there's gonna be that one what rises above the rest, flyin a Jolly Roger that can strike w/cunning & abandon. Them would be Aufgehoben.
Up till this new one on the Holy Mountain label they was just a name. But after bravin the whole of 'Messidor'-once w/the lights off!- I feel that I know what it must've been like to do battle w/the likes of Batholomew Roberts. The discharge Aufgehoben mortally spray across the deck seemed filled w/all manner of shot; Xenakis, Bailey/Bennink, Frank Dommert, H.N.A.S.,Agencement, Frith & Osternag w/muscles, a masculine reconstuction of 'Chance Meeting On A Dissecting Table' this time w/a virile Johnson that don't shoot blanks. The carnage it exacts make's you wanna take your brain out for a bath. Or at least a massage. Then here come's this charmin 7" on the White Denim label, picture disc & everything! On here the Incus buzz seems very much the vibe of the hive, sorta like 'The Legend Of Sleepy Hollow' w/a headless Shakin Ray Levis hauntin the landscape, or Phil Minton w/a mouthful of moustraps, chasin you into quicksand. Who'd have though that a steady diet of twice fried sausages & baked beans on toast would one day 'blossom' into such a vital, precarious & refreshing aberration? But then, what else would you expect? True, they're no Evil Moisture & for that we can all be thankful. Ding!
And with that, I am outta here. Till next time....