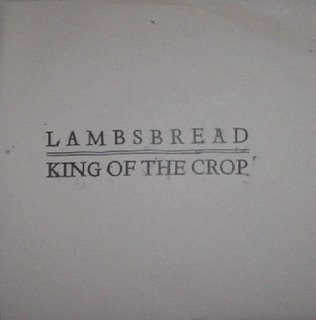 Were we to conduct a survey, I bet most folks would admit to hatin the term New Weird America.Hear, here, I second ye olde motion! Let's face it, it weren't nice to exclude all the dumbo's what aren't from here in the 1st place, so renamin it is the right thing to do. Already I see & hear the tag's New Weirdo's or New Beardo's being bandied around. I propose the term....New Bromantics. Good, yeah? I like it & think it's sufficiently retarded. Hey, it's mostly dudes to begin with & the one's what ain't is always called as much so why not, right? Right on's more like it Bro! Killer name! Now that we've rocked that, let's stoke the jams.
On the top of just about everyone's list of most hyped New Bromantics would have to be Lambsbread. They've been kickin it for a couple yrs now but all's they got to show for it is a bunch've self released cdr's & cassette's that match up about the same as a Wilbur Wood win/loss record. It's alot on both sides of the coin, but when your goin that hard, your gonna throw up a lotta junk (f you know what I mean). Sometimes you eat the bear, sometimes the bear eats you. Unlike some of the more misguided resin scrapers in their Bro hamlet, Lambsbread wants us to know they feed off the marrow of early 80's Hardcore rather than...the obvious (& tiresome) 90's band reference. And even though they's now sequestered on a farm in central Ohio, they's all Boston/Cambridge weened so I guess that why I was hopin on this debut 7" they'd break out like them narc-gobblin beaners of yore, The Groinoids. Alas, twas not to be. Maybe they's savin that for the lp I'm told is on the way. On this ep issued by Skulltones they's chopped out some archive scrud 'n lathered it anonymously on each side. Can't says I know which is which, but on one they sound like a live snippet of RPA finishing up a version of 'Kill The Pope' replete w/Flipper flaps & on the other, a brief moshup of Harpoontang 'n Cornholer soaked in Natty Bo, grindin strings into sparks in a mildewed basement, West Phila, circa 1985. The name's of the pharmaceutical's abused have been changed to confound the lives of the ingestants.
So yeah, this little record. It's okay but there ain't a lot to call'em out on either. Guess we'll all have to wait & see what sorta prizes is burrowed in that forthcoming album. Personally I'd like to see'em hit some zone of outer-strat h/c dork genius like The Neo's or Chemotherapy but I don't think it's in the mix. Lambsbread seem content doin what they do 'n there's an audience already built in to gobble it up. For instance, this 7" was the first one on Skulltones to sell out it's pressing. Not to shit talk Lambsbread, but certainly that ain't 'cause it better than the other two the label released. But don't mind me. You's will figure it out if your of the mind. The thing I kept thinkin to myself over 'n over-that's right, twice- while I was writin this is how come Lambsbread ain't yet done somethin on Load? That label is like Jamaica for the grizzled New Bromantics & I couldn't imagine a tighter fit if you squeaked. Then again, the ink might be dryin on that contract at this very minute. Either way, I've already set forth into the future, forgettin I ever cared to begin with.
Barrister, next case please!