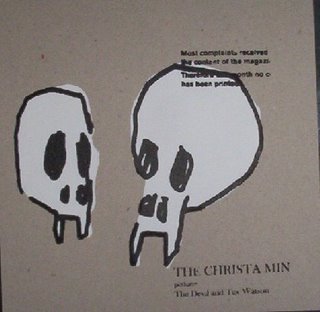 There's a sayin I heard goin round that the only "good" member of Jackie-O Motherfucker is one what's quit. Or been burned, which on my abacus, add's up the same. I reckon the implication is that whoever's still hitched to that wagon ain't the swiftest horse in the race. I hear ya. To me it's akin to volunteerin for Custer's 7th cavalry w/every day bein a potential trip into the valley of the Little Bighorn. I mean, how gratifyin can that be? Could it be any worse if you cut loose, went renegade & started your own band?
Well, in regards to this record (w/participation from a former {?} JOMF) by an outfit called The Christa Min the answer is.....pending. Ha! No really, it aint that easy. I wish it was, but the Christa Min don't got it figured out yet. Or if they have, they might wanna consider a redo. This record embodies a fair amount of the sparkle dust culled from dried tears wept to the strains of Dead C records all over the Pacific Northwest in the mid 90's combined w/the excruciating improv insinuation copped east 'n brought west by JOMF when they was beguiled by the "spontaneity" of act's they shared rolling tobacco w/in NYC & Western Mass over the past few yrs. C'mon, takin the opening riffs of Zeppelin's 'Misty Mountain Hop' & repeatin'em over & over & over as some vocalist free whines into a floppy hat....I mean I expect that from a Gate record but this is ridiculous! Really that's all's goin on; a Zep riff w/extemporaneous "leads" fed into it while some sp'anger reads randomly from the 'Shamanism For Dummies' how-to book. Over the whole of both sides.Every now & then he let's out one of them Iggy yells & for all I know, breaks into a jig that would make Mr. Brojangles (or a stuttering heiress) blush w/envy. Me? That ain't what's makin my cheeks red. It weren't like I had any hopes dashed by The Christa Min. If this is what they wanna do, they's doin it. I guess I'd have liked to see the apple fall a little further from the tree but then I ain't one much for apples to start with. It you's the type to invest in the notion that imitation is the highest form of flattery, then this is indispensable. If however you march to the beat of a fool & his money is soon parted, then forewarned is forearmed. Enjoy the rest've yr Sunday.