Whatever Doesn't Kill You Makes You Stronger. So You Can Go Back And Kill It.....Sun City Girls 'Djinn Funnel' LP 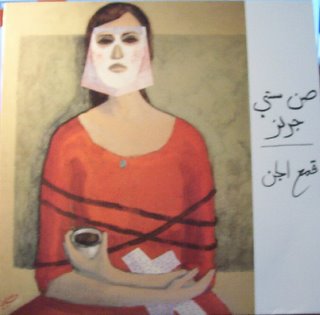 Since this blog was started up I have gotten a bunch've emails from folk's pleadin "how come you don't write something on the Sun City Girls"? At the risk've soundin pedantic, it's not like I don't write about'em, it's just that I ain't written anything in the blog. You should see the top of this desk! It's plum near destroyed from all the love letter's to'em that's been scratched into the surface w/keys, compasses, sissors, combs, nails, screws, coins, glass, rocks, razors, spackle blades, pen knives 'n teeth. Even our two cats, England Dan & John Ford Coley, have clawed into the back've the couch what appears to be an abstract live portrait of the band in action. Hey, we're a top shelf SCG household through & through!
Truth be told, I guess I was just waitin for the right time to blubber about their definitive grandeur. I wanted it to be something special, like an lp (not a cd), maybe even a live show (my favorite) & not one of them Cloaven cassettes that're bein reissued either (if I keep my fingers crossed for too long, will it cut off the blood circulatin to my brain?). And I'll be a goddamned motherfuckin monkey's uncle, but didn't the heavens open up yesterday w/new VINYL of live, never-before-released-to-the-public SCG material culled from 1999-2001 & on a promising new label of Egyptian/Algerian descent (Nashazphone). I wasn't privy to none of them years as a spectator, but if I turbanate my head w/a large beach towel 'n sit lotus style on one of them grass throw rugs I won up to the state fair, I can transport myself to a world where these bedazzling jams are bein played only for Moi. King me! Now I know a few folk's that'll tell you that they are longtime fans of the band but can only "appreciate" the music & not the minstrelsy. That ain't me, not by a mile. Shit, I could be happy kickin back & listenin to these guys play cribbage or callin cows so long as it's recorded where's all the banter & moves is audible. That said, this release will indubitably tickle the tastebuds right off the tongues of them lilly-livers that only go so far. For the rest of us, it's more teeth shiverin icing on yet another spectacular cake. From the opening track where your shot out like a hash bobsled through a bazaar of indeterminable chaos to the closing composition that lumbers 'n floats all the while harkening you back to the familiar like mystic sirens soothing your soggy noggin, you feel privy to a lost era of Sun City Girls exotica. And it's a pretty astounding time frame too. You could argue there's a dustin from the Placebo yrs, hints of Cloaven & a pinch're more of Majora, but really all that means is in this period, they had perfected all those spirits 'n distilled'em into this here high octane brew that is now available for consumption. I look forward to bein drunk for a few more moons to come. Feel free to join me.
Contact the band at http://www.suncitygirls.com/ & the label at; sawteldajal@gmail.com

And try Aquarius, Fusetron, Forced Exposure or Eclipse for possible domestic distribution
Posted by Siltblog at 8:07 AM