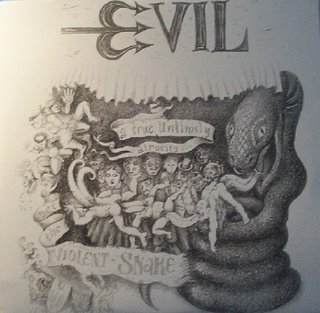 I was readin this book the other day called Fantasmagoriana, don't know it your familiar w/it or not. Basically it's a collection of ghost stories from around the early part's of the 19th century & let me tell ya, that is some scary shit! I guess back in them days, with no tv or baseball or nothin, folks just sat around, made up stories & frightened the fuck outta each other. Excuse the language, but when my neck hairs is raised, the dirty verbiage just spills outta me. Now readin is one thing. I've got so's I don't have to form (all) the words with my mouth anymore, I can pretty near keep up by followin what's goin on w/my eyes. But Goddamn, I was creeped out, had to run around & make sure all the lights was on as I dug deeper into them stories! I'll tell you what....I'll never make another egregious comment about MLB-or reality tv-as long as I'll planted here on God's green earth. I just don't need my guts all rumbled up like that book made'em. Ravens, spectre's, the walkin dead...fuckin fucky fuck! Let's move on shall we?
Everything goes & get's back to normal, that is if you take rainin all the time into account.Then the other day we was havin a fierce electrical storm & it was comin down in buckets when I heard someone knockin on the front door. I opened it up & it was the postman, all covered up in a slicker & he sort've ominously held out this package for me to accept. Looked like another 10" record. I ain't the most superstitious person, but what in the Sam Hill is goin on? This was the second one I got in a month's time & before that I ain't even seen one in, like, almost a decade. Seemed a tad eerie, but whatever. The bands name was (ta da!) Evil & turned out to be a trio of eNZed expats who'd relocated to Ol' Blighty. I threw it on the turntable & cranked it up over the thunder. I got a gander at the artwork & it looked real familiar but before I could assimilate, the 1st song came crashin in. The room became charged w/pandemonium, the sounds emanating outta the speakers were an ungodly evocation of gothic Dead C, like if their song "Helen Said This' had been turned inside out & eaten alive. Holy motherfuckin shitpiss 'n hellfire! Then the 2nd track came roarin out. It was like I hadda modern day Prometheus alive in my parlor & the sonofabitch was here to wreak the Devil's havoc, 'The Legend Of Hell House', MR James & the whirlpool scene in 'A Descent Into The Maelstrom' all happening at once! Holy blessed mother of Jesus H. Christ & the Lord God in Heaven, please let go of my brain for I am not worthy! I thought about the artwork again & that's when I realized the axe wielding cocksucker in this band was none other than David Mitchell, spirit medium & raconteur for such late great outfits as Goblin Mix, Plagal Grind & 3-D's. "He has finally sold his soul" my inner voice was tellin me. "I hope he got a fair price" I shot back to myself, "because Satan's bleedin him for every last cent". And the other side was the same, 2 more squalling tracks've blazing, Beelzebub-baked beauteous bear.The drummer Liz Mathews & other guitarist Roddy Pain I do not know, but if they're in cahoots w/Mitchell, then they's of low moral fiber as well, no doubt headed down the path of barrel fever. Good for them! Maybe they're homesick, or maybe they're home and sick, I can't tell. But whichever, if it's the tonic that's keepin the tumbler's full of this shredding, aural decay, then keep it comin. I find their brand of psychic annihilation most excellent. Check them out at; www.myspace.com/theunholytrinity
& email'em at wishbonerecords@gmail.com
Posted by Siltblog at 10:50 AM

yeah, i think that the rise of TV and all its stimulant radiation glory has really sucked the life out of a god old story. i mean, when was the last time that a made for TV movie was better than the book?