Depend On The Rabbit's Foot If You Will, But Remember It Didn't Work For The Rabbit.....Avarus' 'Luonnon Ilmioita 7" ep 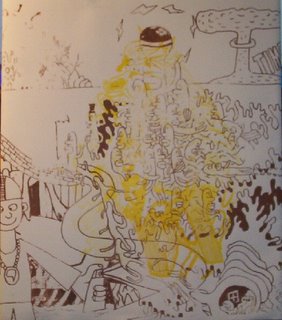 This arrived under the door about an hour ago. The postmen in my neighborhood sure do get an early start! That's alright by me, I was up anyways. I'm tryin to compose a speech I gotta make down in Atlantic City-not sure which casino-tomorrow. I have been elected as the new spokesman for the 'Gimme A Kid, I'm Only A Chance' program. It's kinda like Big Brother but w/better odds. What it does is takes young, inner city ner-do-well's & put's them through a rigorous training program where they learn to be croupier's, Blackjack dealer's & so forth. Some of the youngsters I've sponsored in the past have really excelled, workin tables not just down in AC, but Vegas, Reno, & some of them Indian Reservations that's scattered around the midwest & whatnot. One of'em even made it to the French Riviera! I hear a Coca Cola is 8$ over there. And there's people naked as jaybirds prancin the beaches, drinkin'em like there was no tomorrow. Must be some life. Hell, at 8$ a pop, I wouldn't have no clothes either! And w/that sun beatin down on me, I'd probably look like an old piece of steak tartare w/a set've teeth 'n eyes roamin the shores. Not a pretty sight at all. Ugh, well shit, I need a break from this speechwritin anyhow. So far all I got is "Ladies & Gentlemen of the jury...." I thought they'd get a kick outta that. Levity ain't necessarily my strongest suit.
So this Avarus 7" showed up & it sure is makin my morning. Excuse me if your already hip to all this Finnish stuff, but while you was pokin notches in your white belt, I was busy workin. It's all kinda new to me. I mean, I'm familiar w/The Silver & Liiminarrina & even the older Hardcore stuff, but this go round it seems things have gotten more drawn out & organic. Much less spazzed out punk & more free form folk, or somethin to that effect. I think these guys have somethin to do w/that Maniacs Dream lp that I like too. And they was on Brian Turner's show & played at Terrastock, but you know, some of us ain't got all the time in the world for fun & games.The label on this 7" says it's from 2002 which means that I was in Greenland at the time. Not that far away from'em when you think about it! Had I only known. The a-side conjures up visions of one of them Robert Bly Men's Lib camp outs, except this time the participants are well fueled an makin a spectacle. If you beat a drum 'n moan in the woods & nobody hear's ya, does it make a sound? The answer is yes, as the b-side is testament too. Nobody is a pretty big word & not for nothin does the forest come alive in protest. The flip is a full on charge of the night brigade, complete with flies, mosquitoes, wasps, tics, red ants, rattlesnakes, owls 'n bears risin up to seek revenge for havin their tranquility impressed but a bunch've sotted tree huggers. That's how I'd feel too! Plus all of it's housed in a very spiffy oversized sleeve w/wraparound silk-screened artwork of a decidedly post Panter-esque variety. It's some good stuff indeed. I won't pretend that I know anything much about Avarus, but from what little I've heard, I'd bet that they ain't gonna crap out anytime soon. For my money these guys are comin out with 7 or 11 on every roll. And it's never too late to get behind a winner.

This ep is available from http://www.boingbeing.com/