Cleveland, It's A Plum!.....Numbskull's 'Final Days Of Torture' LP 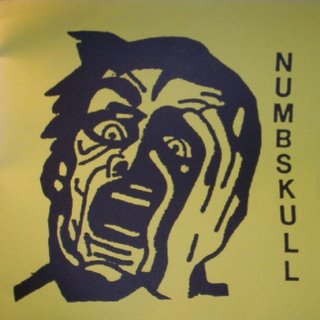 Not that I was there (much) 1st hand, but the Cleveland Scene of 85-86 was goin through a major transformation. Some peeps seem to think that the Electric Eels & Pagans was always around, ready to don superhero cape's & save the city from stagnation at any given time. Truth was, they was long gone & still some yrs away from canonization or reissues (& reunions). Pere Ubu weren't around no more neither, but let's face it, once they traded Tom Herman for Mayo Thompson, they'd gone from rooster to capon anyways. So in essence, it was left to the hoi polloi to keep the fires burnin. And fan the flames they did; the St Valentine's label/collective was started up which helped provide another round of (inter)national exposure for bands such as Death Of Samantha, Reactions, My Dad Is Dead, Offbeats, all of whom would soon jump to Homestead or Relativity to revel in more lucrative & complicated accounting. The hardcore blur of Starvation Army & The Dark was becomin burly 'n metallic (the Dark would morph into Knifedance who released an lp in '88) & there was plenty of action goin on otherwise w/labels like Herb Jackson & After Hours tossin up logs when they had the lumber. Eventually Scat would enter the fracas to become kingpin, turnin on the world to the cities 70's era prime movers & in all this you'd think there'd be no stone left unturned. I mean, even Psychobilly Cadillac put out a record! So how is it that it's taken 20 yrs for Numbskull's classic 'Final Days Of Torture' to finally become realized on vinyl?
The most likely answer would be they didn't give a shit to begin with. But that explanation's too boring & besides, you need money for these things (you had to pony up w/$$ at the SVR table) which equals less alchohol to some mathematicians, so let's just say their genius was too pure-grain for the distillation of vinyl & "the big time". Undeterred, 'Final Days' made the rounds as a super cult-item cassette (much like the Electric Eels material did before the Tinnitus lp in '89), one that those in the know nodded 'n winked about w/respectful elan. Formed as a trio of vocal/bass (aka "big guitar")/drums & existin in a condemned property between hardcore 'n crossover metal, Numbskull exfoliated a lo-fi sludge that smacked of Black Sabbath being channeled by Flipper (or in a parlance for the more "obscure" consumer scum out there,the 012 meets Men's Recovery Group). Sophisticated? They could dress themselves. Crazy? Like a fox! The lead bass throb of Dale is the Dukowski-as-Ginn wetdream that every BFlag fanboy has never known, drummer John Henry (also of Starvation Army) is right there too crashin away & the "vocal torture" 'n lyrics of Darryl are as brilliantly "dumb" 'n dope as any malcontent whoever claimed their last name ended w/Ramone. A 2nd cassette followed entitled 'Dale Is My Guru' but it was 'always a bridesmaid, never a bride' for Numbskull & at some point, they split up the hootch & went their separate ways.So imagine my surprise this past wkend when I took a break from the National Enuresis Convention in downtown Clevo to have a look around a neighborhood record shop & found 'Final Days Of Torture' on LP! Let's just say, I was lucky to have been wearin a diaper's all. Financed by local label My Mind's Eye Records (also a killer store, esp. for vinyl) & released in an edition of 300, here's your chance to own & pontificate on a missing piece of the Cleveland Rocks puzzle you (more than likely) didn't know existed. The mistake on the lake has finally been corrected.Contact'em at; mme@mymindseyerecords.com
& ask for Collinwood-001. Don't worry, they'll know exactly what your talkin about!
Posted by Siltblog at 7:58 AM